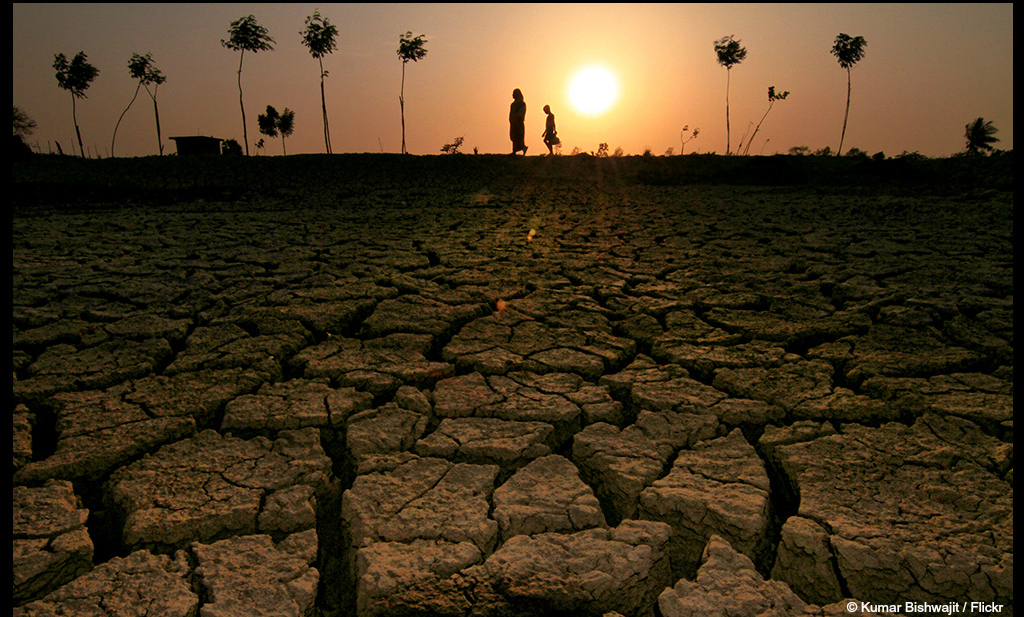 A silent crisis: How climate change drives people from their homes by destroying their livelihoods

When we think of climate refugees, we tend to think of cyclones, floods and storms forcing people from their homes. But emerging research indicates that we are missing a bigger picture – and that the overall population of concern may be much larger than we currently think.

According to a recent study, rising temperatures are a significant driver of permanent migration among poor farmers in Indonesia. The study found that temperature increases were far more likely to induce migration than rapid-onset hazards such as floods, due to their long-term and cumulative effects on household income. Based on the results, the researchers estimated that an additional 2°C rise in temperatures could force up to 5% of Indonesia’s population (12.4 million people) to migrate by the end of the century – that’s an amount just under the size of Zimbabwe’s entire population.

Climate change is expected to cause similar trends in vulnerable countries across the world, driving climate refugees to migrate both within and across borders. Studies in Bangladesh and Pakistan confirm the findings in Indonesia. They suggest that whilst the impacts of extreme events have relatively minor effects on population mobility in the long-term, the loss of income associated with the impacts of higher temperatures and rainfall variability on agricultural communities is a far more significant driver of permanent migration.

People on the frontlines of climate change who have participated in EJF’s Home Truths project have told us how the influence of climate change on livelihoods is an important driver of ‘silent’ displacement. Haredo Jimale told us how she had to walk for 8 days from Southern Somalia to get to Dadaab refugee camp in Kenya after drought decimated her crops. She was one of the thousands of Somalis to be granted prima facie refugee status between 2010 and 2012, even though they were fleeing the effects of drought and not persecution or conflict.

We often think of climate refugees as being associated with the immediate, dramatic and highly visible consequences of climate change and frame their movement as being driven by extreme ‘disasters’. However, as these studies highlight, there is a silent and more significant crisis emerging – a crisis in which the link between climate change and involuntary movement is perhaps less clear-cut but much more concerning.

On the surface, the driving force for migration is often economic – as people seek to adapt to economic stress by migrating in search of alternative sources of income and opportunities. Only upon closer inspection – by looking at the effect of climatic change on a household’s economic circumstances – does the climate link become more evident. The Intergovernmental Panel on Climate Change’s(IPCC) projection that global agricultural yields will decline 2% each decade from 2030 and climate-induced food crises may push an additional 50 million people into food insecurity by 2050 mean that understanding the link between environmental stress, livelihoods and ‘crisis migration’ becomes incredibly important.

As the impacts of climate change unfold and intensify, we can expect a large number of climate refugees to be migrating as a result of the impact of slow-onset changes on their livelihoods. The problem is that the international community currently understands such climate refugees to be economic migrants who are moving voluntarily. International laws and policies fail to acknowledge that their migration is, in fact, a form of displacement and that there is a major gap in international legal protection and assistance. This is particularly true for those who are forced to migrate across borders, given that they have no rights to admission to another country or protection under human rights law.

In order to address this protection gap, the international community needs to recognise that the loss of sustainable livelihoods due to climate change can and does drive forms of migration that are not entirely voluntary. Whilst consultative efforts to tackle this emerging issue and tests which probe the reasons for people’s movement to help identify those in need of protection are steps in the right direction, the global community urgently needs to build an international protection agenda that systematically addresses climate-induced displacement in all its forms. If we don’t, we may find that a silent crisis turns into a catastrophic and tragic roar.

This blog is part of a series exploring how climate change affects human mobility in different ways and how we need to recognise this if we are to effectively protect and assist the growing number of climate refugees.