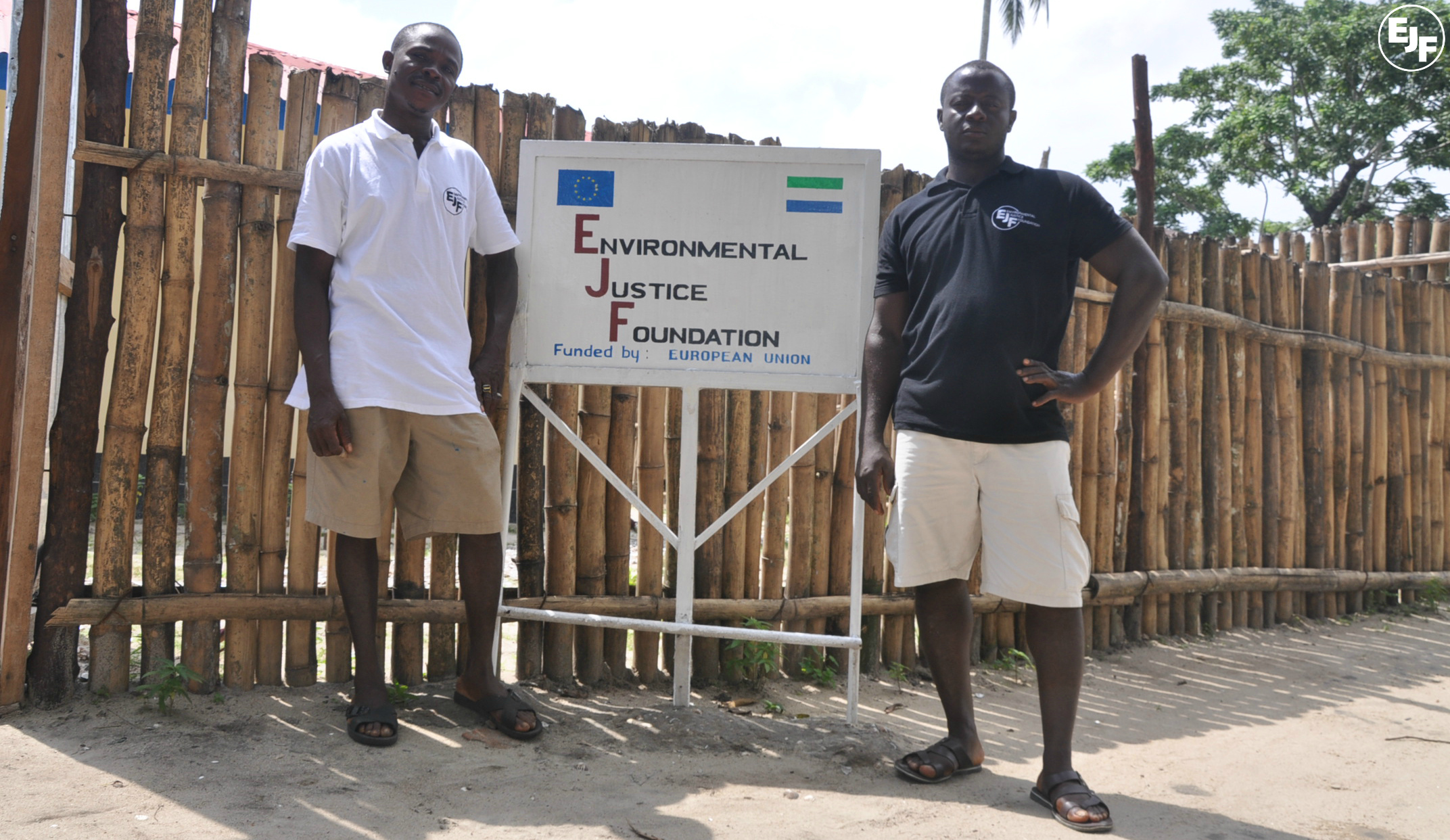 EJF has opened a new office in Bonthe, the main town on Sherbro Island in southern Sierra Leone. The office will be the base for EJF’s ongoing community surveillance project that exposes illegal fishing by foreign vessels.

The office will be the base for EJF’s ongoing community surveillance project that exposes illegal fishing by foreign vessels. It will also host EJF’s European Union-funded project to support the development of co-managed Marine Protected Areas (MPA) in Sierra Leone.

Students from the local secondary school received prizes for their winning designs representing EJF’s work in the Sherbro River area. The ceremony culminated in a traditional "pouring of the libation" in which Chief Buweh Kalone, from Mania Town, blessed the new EJF office and its mission. Council officals then had the honour of cutting the office’s ribbon before guests received a guided tour of the new office.

"The opening of the office in Bonthe is a landmark in this Municipality, for the Kingdoms and the Island. I thank EJF for their work with community surveillance, fighting the trawlers who steal our fish, and for providing the boat as an emergency medical ambulance. I look forward to seeing action in EJF’s work to develop a Marine Protected Area in the Sherbro estuary. They are helping to improve the lives of fisherfolk and giving a sense of worth back to the fishing industry in the area." Councillor Solomon Lamboi, Chairman of Bonthe Municipal Council’s Standing Committee on Fisheries and Marine Resources

EJF has been working with fishing communities in the Sherbro River area to combat pirate fishing by foreign industrial trawlers since 2008. EJF’s community surveillance responds to call-outs from local fishers who frequently face incursions from illegal trawlers supplying the European seafood market.

In March this year, evidence gathered by EJF’s community surveillance project led to the seizure by European authorities of £4m of fish believed to have been caught illegally in Sierra Leone and other West African countries.

In January 2011, EJF began work on a 5-year EU-funded project to support the development of MPAs in Sierra Leone and Liberia that will be co-managed by government and local fishing communities. The development of MPAs has been highlighted as key step in enabling the recovery of fish stocks and guaranteeing the futures of coastal communities, which are reliant on fisheries for employment and up to 80% of animal protein.

"With this new office, we can continue to support local communities seeking a better future for artisanal fishing in and around the Sherbro River Estuary. As we expand our activities, the office will be a place where people can come and learn about EJF’s work, as well as meet and discuss solutions to the challenges faced by fishing communities in the area." Victor Cole, EJF’s Sierra Leone Country Representative