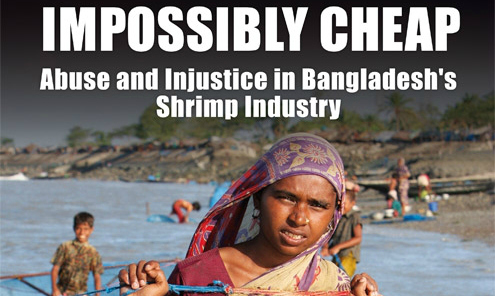 Impossibly Cheap: Abuse and Injustice in Bangladesh’s shrimp Industry, a new report and film launched today, reveals evidence of human rights and labour abuses which take place at every stage of the lucrative Bangladeshi Shrimp industry.

The report highlights that, despite the fact that shrimp is one of the most valuable fisheries products in the world, with Bangladesh among the top ten exporters and shrimp its second largest foreign currency earner after the garment industry, the supply chain is plagued by economic, labour and social issues and workers face exploitative working conditions.

The report examines how global demand for a plentiful supply of cheap shrimp has caused rapid expansion of the industry and significant regulatory gaps. The majority of the sector is unregistered and informal and this, coupled with a lack of transparency in the supply chain, allows human rights and labour violations to occur unchecked.

Asma, a 10-year-old fry collector said "My parents cannot afford to pay for my school stuff, for example pens or notebooks, so I get money from this to buy all that. When all the people go and do six hours, I go too, maybe two or three days a week.”

There is a hidden human cost to shrimp imported from Bangladesh for distribution and sale in the EU and US. Current legal requirements for imports are concerned with food safety, hygiene and consumer health protection with little consideration of potential labour and human rights abuses in the supply chain of the producer country.

EJF is calling for the strategic and long-term commitment of all shrimp industry stakeholders to bring an end to human rights and labour abuses and foster the development of socially equitable and environmentally responsible shrimp farming.

Testimonies from the victims EJF interviewed:

“If I find it difficult to pay back, our net was taken away, he’s threatened us.” “Look at us, we are the loser in every way...How will we survive?”

“The way they treat me in really unspeakable. They don’t treat us as human beings, and the language they use – it’s really derogatory. It’s not dignified at all. For example, when we go to ask for our wages they say, ‘Go to the street and beg instead, why are you here?’ That really upsets me a lot.”

“It’s outrageous than an industry generating such high levels of export revenue is failing to uphold the basic human rights of the workers that produce its products. Consumers in Europe and the US should be aware of the hidden cost to the impossibly cheap shrimp we consume that involves the brutal treatment of workers. In the 21st century, food produced by forced or bonded labour should not be on our plates. The problems are systemic but the importance of export markets to Bangladesh’s shrimp industry offers an opportunity for retailers and consumers to use their power to stand up for the basic rights of those who provide our shrimp. Changes to the structure, management and regulations of the industry could protect those who are vulnerable and suffering from abuses and allow the people of Bangladesh to benefit from their natural resources.”