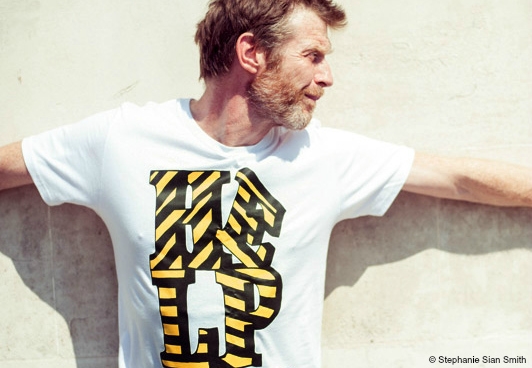 Jason Flemyng helps to Save the Bees

Jason Flemyng, the award-winning actor from Lock, Stock and Two Smoking Barrels, Snatch, Later Cake, Stardust and I Give It a Year, has joined EJF's campaign to Save the Bees.

Jason joined us for a photoshoot in the sunshine amongst the flowers and bees in London's Hyde Park, to model our new bee campaign t-shirt by eco-brand Rapanui.

As part of EJF’s campaign to Pick your Cotton Carefully, the t-shirts aim to raise awareness of issues such as forced child labour and deadly pesticides in cotton production and encourage consumers to think about where their cotton comes from.

The new EJF Rapanui bee t-shirts are traceable on a map on the Rapanui website, which shows the entire supply chain from India to the UK.

Rapanui also has a history of campaigning with celebrity supporters. In 2012 they facilitated weatherman Michael Fish performing a BASE jump for climate change awareness. Rapanui have also worked with Sir David Attenborough, Chris Packham and Kate Humble.

"This year EJF is fighting for environmental justice close to home and for a species universally loved, we are working to Save the Bees. We are happy to be working with Rapanui Clothing, and celebrities such as Jason Flemyng, as part of our campaign to raise awareness through fashion of the vital need to protect the UK’s bees and insect pollinators. Our environmental protection, food security, economics and the livelihoods of our farmers and food producers depend upon it." Steve Trent, Executive Director of EJF