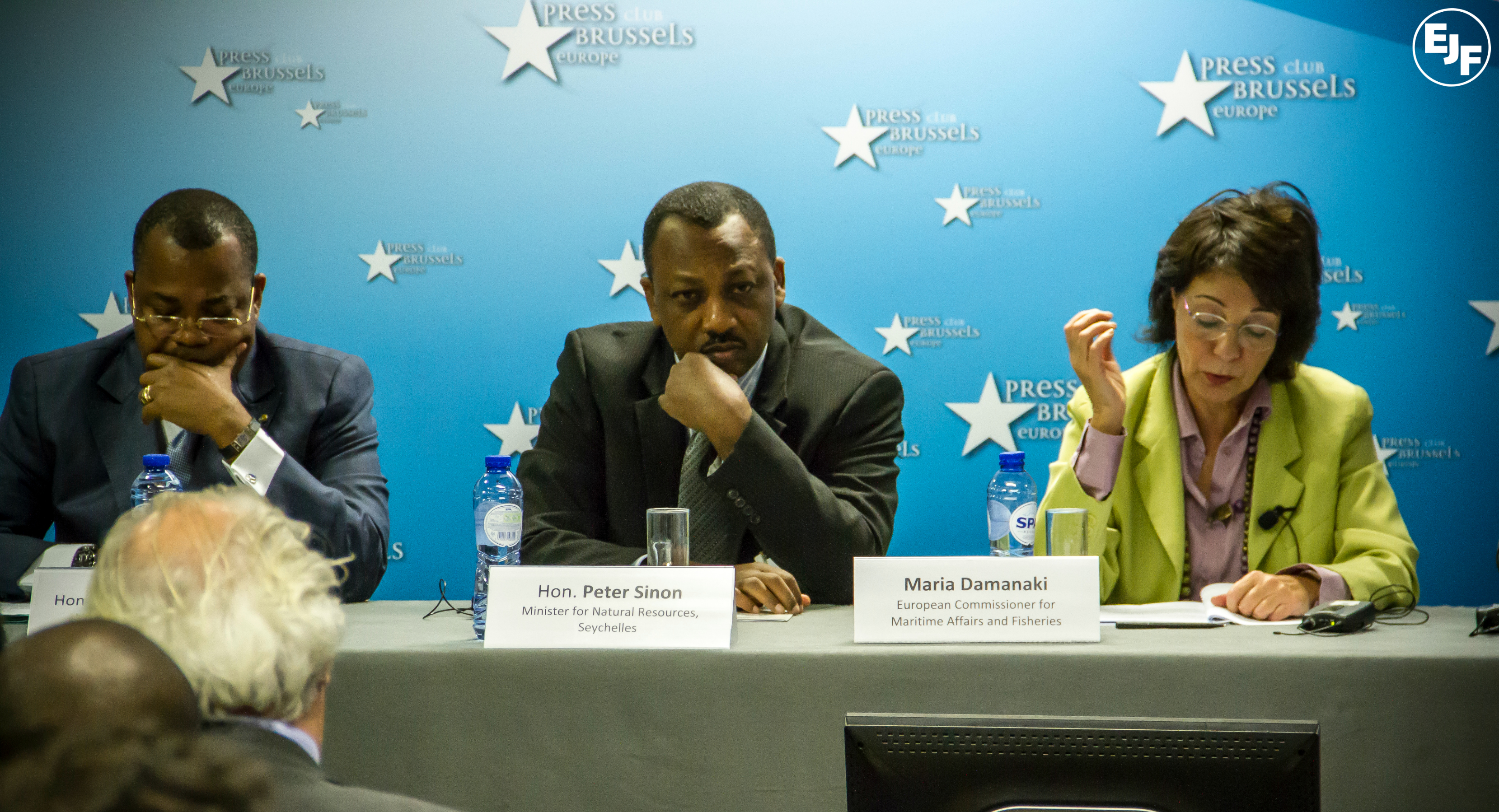 On Tuesday evening (5th November) a representative of the Korean Government announced their commitment to investigate a Dutch-flagged cargo vessel, Holland Klipper, carrying an estimated US $14 million of suspected illegal fish, which arrived in the Korean port of Busan on Thursday 31st October.

The surprise announcement came during an event hosted by the Environmental Justice Foundation (EJF) in Brussels to encourage EU Member States to take stronger action on pirate fishing. Mr Sangho Park, Fisheries attaché at the Korean Mission to the EU, made the announcement following speeches by European Commissioner for Maritime Affairs and Fisheries Maria Damanaki and other high profile figures in international fisheries management.

Mr Park confirmed that the vessel had arrived in the Korean port of Busan on Thursday 31st and that the authorities were carrying out an investigation into the legality of the fish it is carrying. The announcement also included the promise that the results of the investigation would be made public when completed.

"It is vitally important that major seafood markets such as South Korea send a strong signal to pirate fishing operators that they cannot continue to profit from the degradation of the marine environment, the depletion of fish stocks and the destruction of the livelihoods of coastal communities."

However, he said he would reserve his judgement pending the outcome of the investigation:

"South Korea must now prove by actions the statements it has made. It must crack down on these illegal operations that are undermining legitimate businesses, stealing from developing African nations and damaging our marine environments. There is no reasonable cause for further delay in acting or for failing to take forceful and decisive action against these operations."

The 4,000 tonne vessel is believed to have received a transfer (or “transhipment”) of fish from up to 20 Korean trawlers 95 miles off the coast of Guinea on 20th September. “Transhipments” of fish at sea are banned under EU and Guinean law.

EJF investigators used Satellite Automatic Identification System (S-AIS) technology to document the transhipment, and then called the Captain of the vessel on a satellite phone to confirm the illegal activity.

Two days earlier, EJF had tracked the Korean-flagged Kum Woong 101 fishing illegally in Sierra Leone’s Inshore Exclusion Zone (IEZ) - an area reserved by law for local fishers using artisanal canoes – before it travelled to Guinea, where it transferred its illegal catch to the Dutch-flagged vessel.

Satellite information gathered by EJF shows Kum Woong 101 bottom trawling within one nautical mile of Sherbro Island in Southern Sierra Leone, where impoverished local communities are heavily reliant on fishing for their food and income. EJF works with fishing communities in the area to generate “IUU Alerts” (Illegal, Unreported and Unregulated) aimed at stopping the trade in illegally-caught fish and providing evidence so illegal vessels can be sanctioned.

After discovering the illegal fishing activity, EJF transmitted an “IUU Alert” to the European Commission, as well as the Dutch and Korean Governments. The European Commission is believed to have launched its own alert, and the Dutch and Korean Governments confirmed to EJF that they were investigating the case, but until this announcement it reamained unclear what action was being taken.

In a statement to the BBC, the owner and manager of the Holland Klipper, Green Sea, has claimed that the transhipment was authorised and that they have clauses in their contracts protecting them from liability. In a statement, the company pointed to a “BIMCO” clause in their chartering agreements, which would mean that the charterer of the vessel takes responsibility for any illegal fishing activity.

However in a communication to EJF, the international shipping organisation BIMCO has said that they have never created or approved a contractual clause relating to IUU fishing, and would be contacting Green Sea to request that they stop linking them to such a clause.

At the event, the European Commissioner for Maritime Affairs and Fisheries announced that three out of eight countries that were warned they could face trade restrictions for their involvement in IUU fishing, have failed to improve their performance. The Commissioner said that the failure of Guinea, Cambodia and Belize to cooperate in the fight against IUU fishing left her “with no other choice but to move to the next phase”. Commissioner Damanaki is due to ask the College to identify the countries and formally recommend to the European Council to designate them as “non-cooperating”.

“Thereafter, upon final listing by the Council, all fisheries products caught by vessels of these countries will automatically be banned from entering the EU market. EU vessels won't have the right to fish in the waters of those countries anymore,” Maria Damanaki, Fisheries Commissioner

A new short film by EJF, ‘Ending Illegal Fishing’, with footage from EJF’s investigations into pirate fishing in West Africa, was also shown at the event.

Additional speeches at the event by Gabriel Mato Adrover, Chair of the European Parliament Committee on Fisheries; the Honourable Julien Nkoghe Bekale, Minister for Agriculture and Fisheries Gabon, the Honourable Peter Sinon, Minister for Natural Resources Seychelles, and Carlos Domínguez, Secretary-General for Fisheries Spain, offered further perspectives on the success of the IUU regulation to date and the impact of IUU fishing.

“IUU fishing has in effect become a true gangrene for fisheries economies and for the preservation of marine ecosytems."