Exploring the links between illegal fishing and human rights abuses

Read the report
Watch Video
Out of the Shadows: Illegal Fishing and Slavery on our Oceans

Out of the Shadows: Illegal Fishing and Slavery on our Oceans

Seafood is a multi-billion dollar global industry. Yet illegal fishing is devastating the oceans and driving human rights abuses.

Falling revenue, coupled with the growing demand for cheap seafood, have created powerful economic forces, driving down profits in many fisheries and leading to increased abuse of crews.

In recent years, EJF's reports, along with those by journalists and other NGOs, have repeatedly shown how overfishing and illegal fishing have substantially increased the risks of serious human rights abuses at sea.

Blood and Water sets out the links between rapidly declining fish stocks in the world’s oceans, in part caused by the widespread illegal, unreported and unregulated fishing, and serious human rights abuses in the global fishing industry.

It provides case studies describing the problem, and analyses solutions that can be employed to address it – in particular, the pressing need for greater transparency in fisheries.

Illegal, unreported and unregulated fishing threatens marine environments and the people who rely on them.

By depleting fish stocks and biodiversity, illegal fishing puts the food security and livelihoods of coastal communities at risk. 90% of people employed in capture fisheries work in small-scale fisheries.

It also deprives countries of their marine resources and undermines efforts to manage fisheries sustainably. 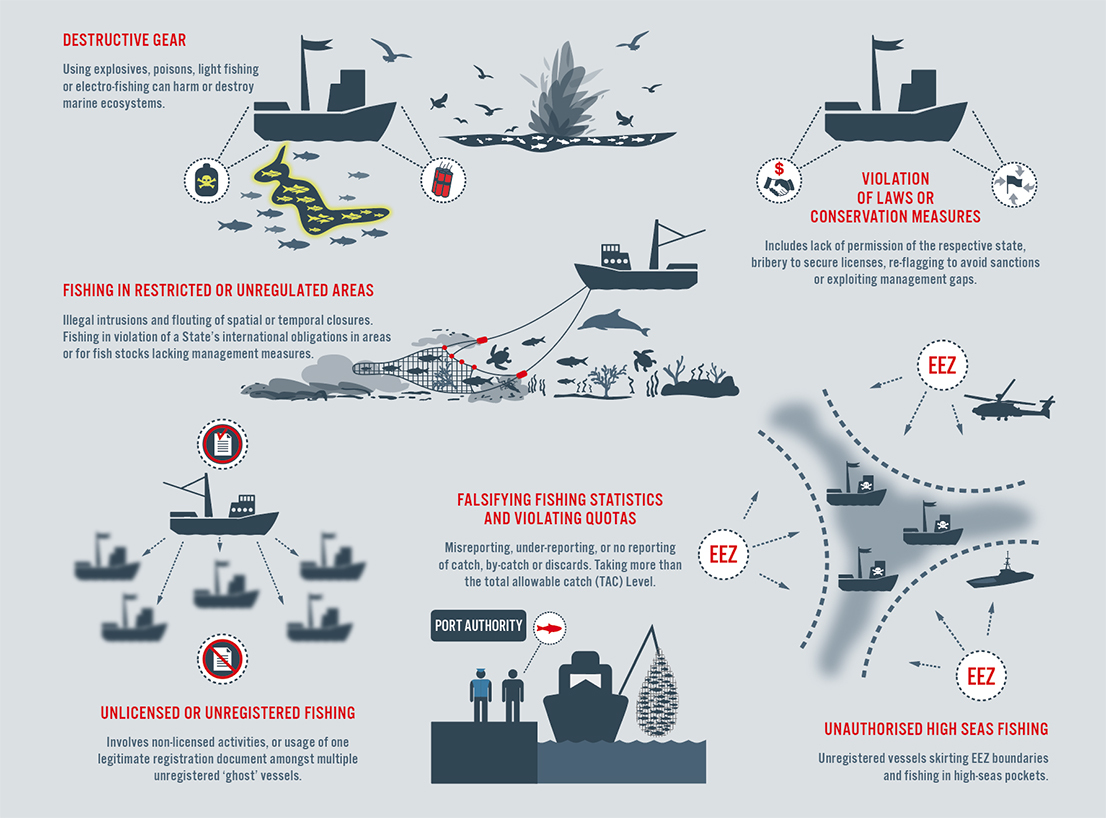 How are human rights abuses related to illegal, unreported and unregulated fishing?

Workers in the fishing sector are particularly vulnerable to human rights abuses, such as trafficking and forced labour. By the remote nature of their work and the lack of transparency in large parts of the industry, fishers are already in a precarious position.

They are isolated and sometimes far out at sea, exposing them to risks of exploitative working conditions, wage reductions and labour abuses, unnoticed by the authorities or regulatory agencies. In some respects, fishers are a ‘hidden’ workforce, invisible to the authorities and consumers.

When fisheries aren't managed sustainably, the damage to the oceans and fish populations can be serious, with some areas becoming fully depleted. Overfishing leads not only to the collapse of ecosystems, but also to increased poverty and malnourishment for millions of people who rely on the oceans for their food and livelihoods. 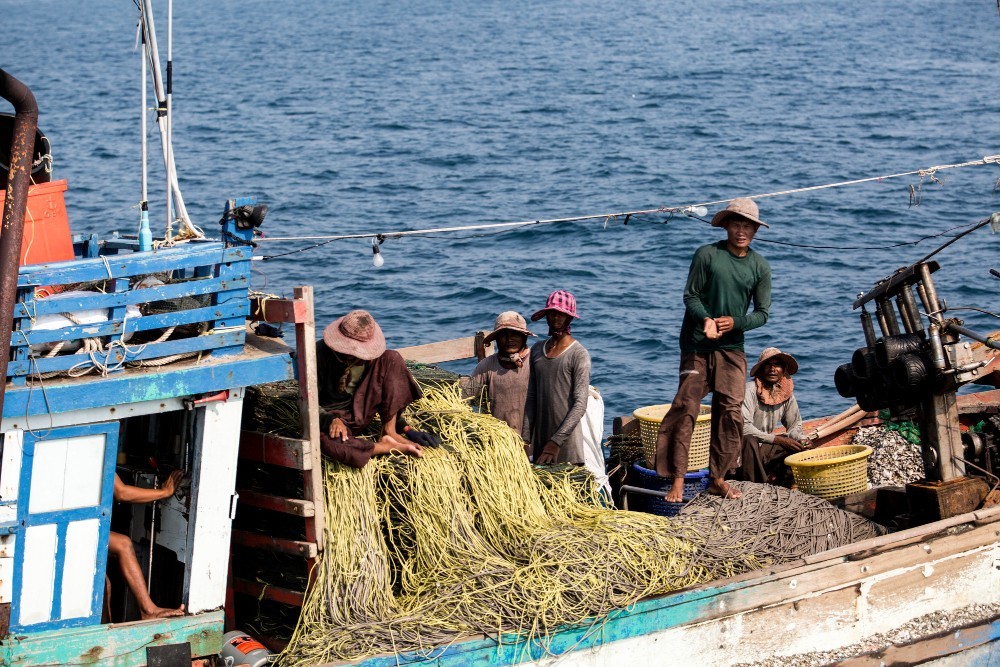 As catches decrease, some local and commercial fishers take increasingly drastic measures to ensure profitability – such as using illegal fishing gears and fishing in protected or restricted areas.

This exaggerates the problem and accelerates the exhaustion of fish stocks. Increased competition among fishers drives this rush to catch the remaining stocks, further damaging the oceans and threatening fish populations.

As fish stocks are depleted, fishing boats are forced to travel further out to sea to fish.

Fuel costs are unavoidable, but labour costs can be modified and distorted. Fishers’ wages account for up to 60% of operating cost when at sea.

The pressure on vessel operators to cut costs incentivises the use of migrant workers who are often from poorer, developing countries where insufficient domestic employment opportunities pushes people to seek work abroad.

Migrant workers can face being poorly paid and have fewer social protections and labour rights compared to their domestic counterparts. This vulnerability to exploitation and a drive for reduced costs increases the risks of forced labour and trafficking for fishing crews.

The links between overfishing and workers exploitation 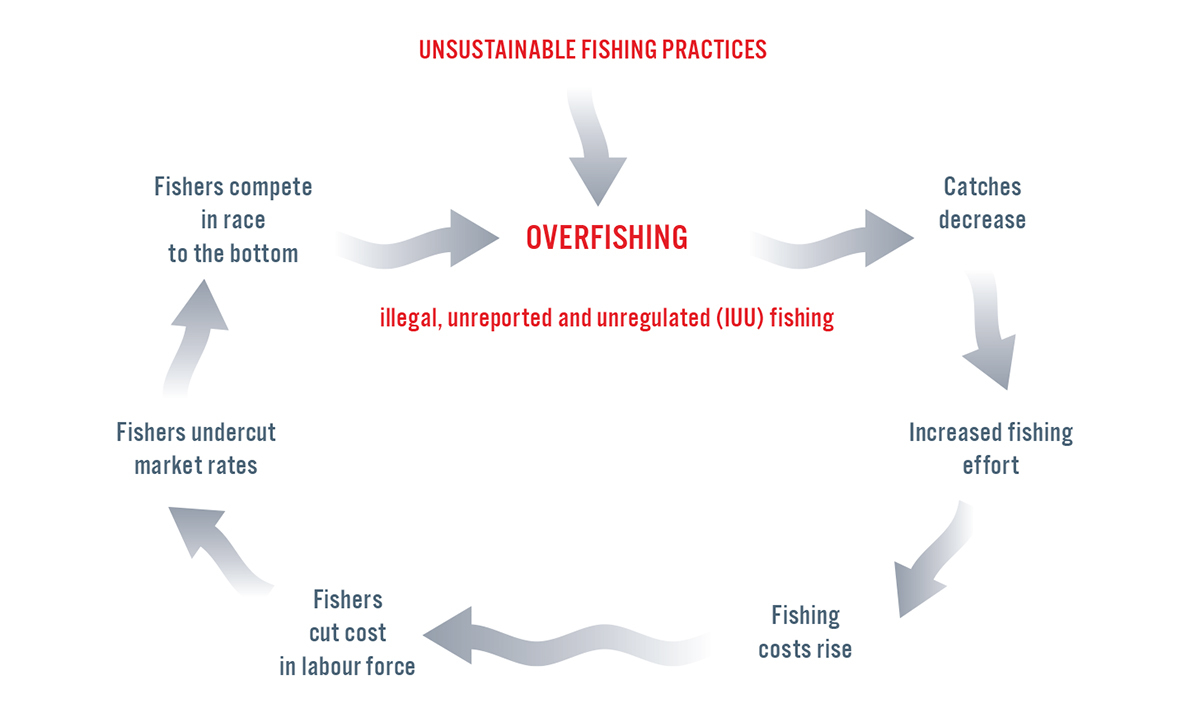 Why are workers vulnerable to slavery, trafficking and forced labour?

There are currently no international requirements for measures such as a unique vessel identifiers or registration on a global record of fishing vessels, which would help authorities track vessels. Vessels may also intentionally register with states less able or willing to exercise control on vessels. This is known as using ‘flags of convenience’.

Migrant workers are especially vulnerable to forced labour because they often experience communication and cultural barriers. This increases the likelihood of abuse.

For instance, contracts may not be provided in their native language, meaning that they cannot understand the conditions of their employment.

In addition to often having weaker legal protections, migrants may be unaware of those rights they do have and may not know they can report grievances or complain about working conditions.

Abuses that workers can experience onboard fishing vessels 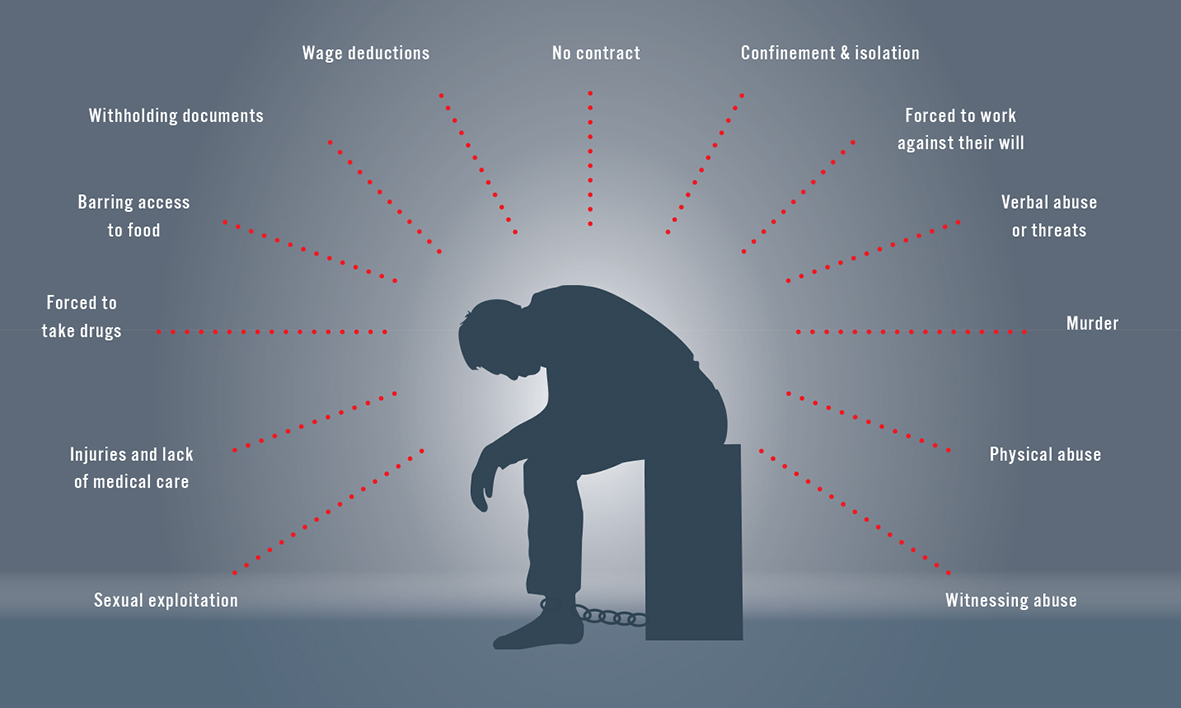 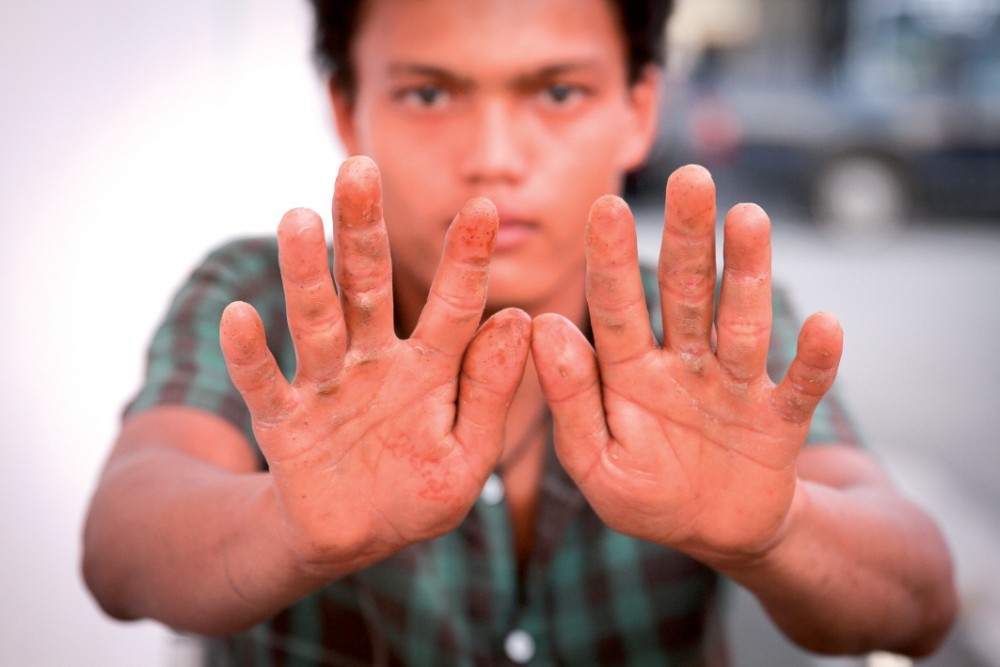 Those who engage in slavery and human trafficking in fisheries capitalise on gaps in monitoring, surveillance and enforcement. Weak governance has allowed these issues to become embedded in many national seafood supply chains.

Practices such as trans-shipment at sea and the use of flags of convenience further exacerbate these risks, making it more difficult to identify and track possible cases of illegal fishing or labour abuses and less likely that governments can take enforcement action. These practices also facilitate other illegal activities such as drug or weapons trafficking, and can be associated with the use of tax havens.

Just as there is a direct causal link between illegal fishing and human rights abuses at sea, the approach to stopping them must be aligned. Fortunately, there are now solutions that are easily implemented and increasingly affordable. States and international authorities, fishing companies, processors, importers, retailers and consumers can all play a part. 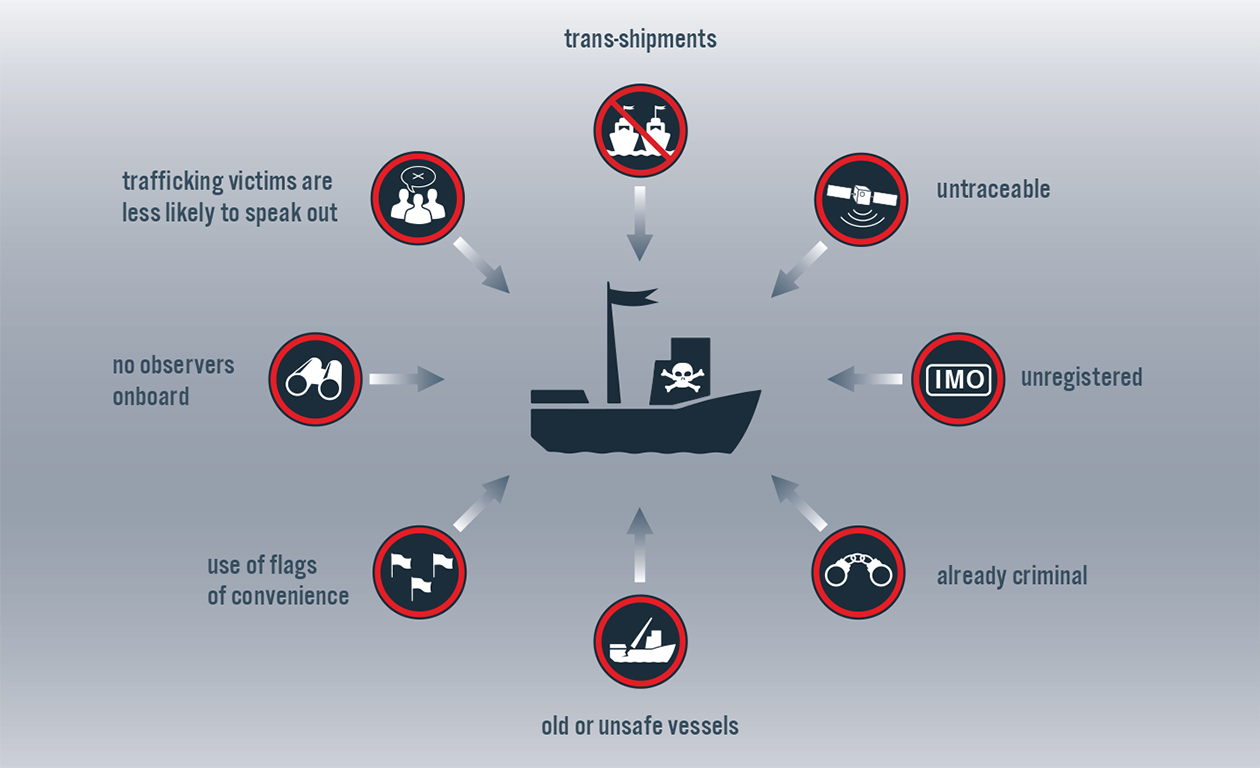 The ILO estimates that of the 20.9 million victims of forced labour around the world
89% are exploited by private agents or enterprises such as labour brokers.

To combat human rights abuses and associated problems in the seafood industry, states should embrace greater transparency, bringing fisheries out of the shadows. EJF has developed ten transparency principles that can be applied today at low cost.

1. Give all vessels a unique number.

5. Ban transferring fish between boats at sea – unless pre-authorised and carefully monitored.

6. Set up a digital database of vessel information.

7. Stop the use of flags of convenience for fishing vessels.

8. Publish details of the true owners of each vessel – who takes home the profit?

9. Punish anyone involved in illegal, unreported and unregulated fishing.

10. Adopt international measures that set clear standards for fishing vessels and the trade in fisheries products. 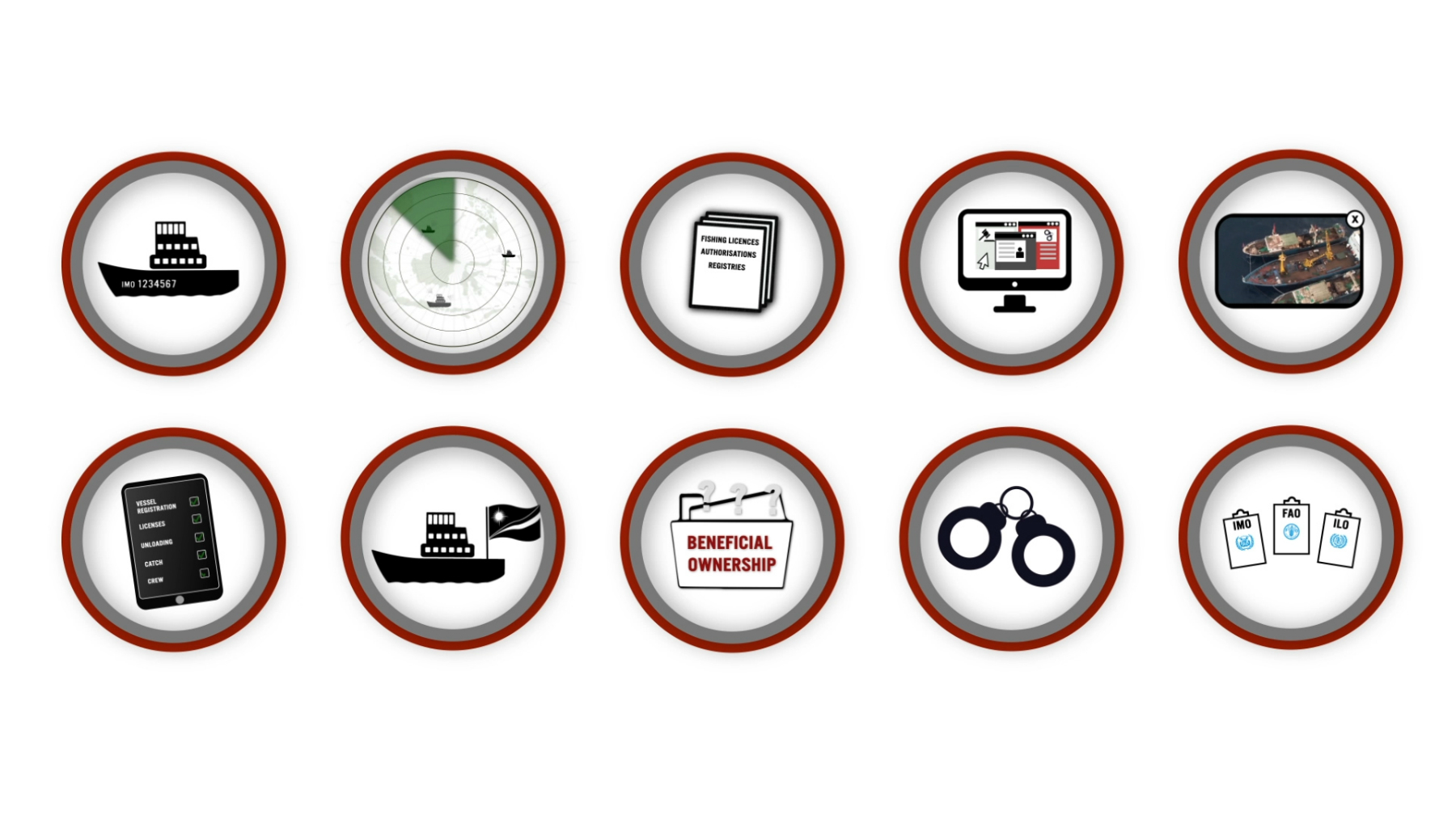 In addition to adopting these transparency principles, states should also do the following to tackle serious human rights abuses in their fishing industries:

Along with the need to manage risks to reputation, industry face increasing regulatory requirements to consider the risks of human rights abuses in their supply chain. In 2011 the UN Human Rights Council issued Guiding Principles on Business and Human Rights to encourage states and industry to do more to address supply chain risks. This has been followed by increasing national laws, such as the UK’s Modern Slavery Act, that encourage industry to understand and mitigate human rights abuses in their supply chains.

Corporations involved in the global seafood industry should:

Adopt clear risk mitigation policies and processes that extend through the supply chain, backed with third-party verification, to identify and deal with human rights abuses and associated issues. EJF, together with WWF, other NGOs and industry developed a Code of Practice that supports processors and importers to do this.

Consumers can play their part to encourage industry to do more to address risks in their seafood supply chains. They can: