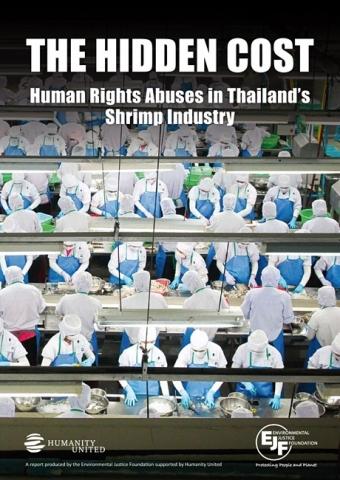 The report exposes the reliance of Thailand’s shrimp industry on migrant workers, many of whom are trafficked and face arduous journeys, and even armed robbery, before enduring abusive conditions in shrimp processing factories. During investigations carried out in October 2012 and March 2013, EJF gathered evidence of perilous human trafficking into Thailand, as well as serious labour and human rights violations in shrimp facilities.

The Hidden Cost: Human Rights Abuses in Thailand’s Shrimp Industry follows EJF’s Sold to the Sea report, published in May this year, which revealed evidence of human trafficking, labour abuse and the routine use of violence, including murder, in the Thai fishing industry.