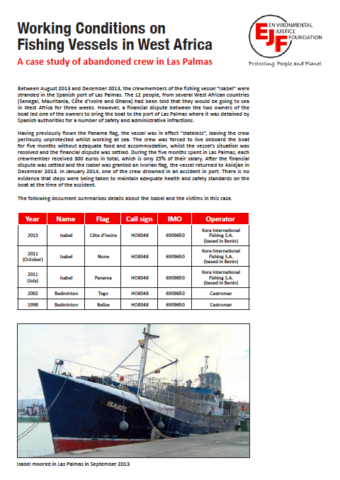 Isabel's 12 crew from several West African countries were stranded in the Spanish port of Las Palmas where the vessel was detained by Spanish authorities for a number of safety and administrative infractions. The crew were forced to live on board the boat for five months with inadequate food and accommodation. The crew members received 300 euros in total, only 25% of their salary. On the return of Isabel to Côte d’Ivoire in January 2014, one of the crew drowned in an accident in port. There was no evidence that steps were being taken to maintain adequate health and safety standards on the boat at the time of the accident.The treatment of Isabel’s crew in Las Palmas demonstrates that cases of abuse in the fishing sector can happen anywhere in the world and are not issues isolated to fisheries in developing countries.