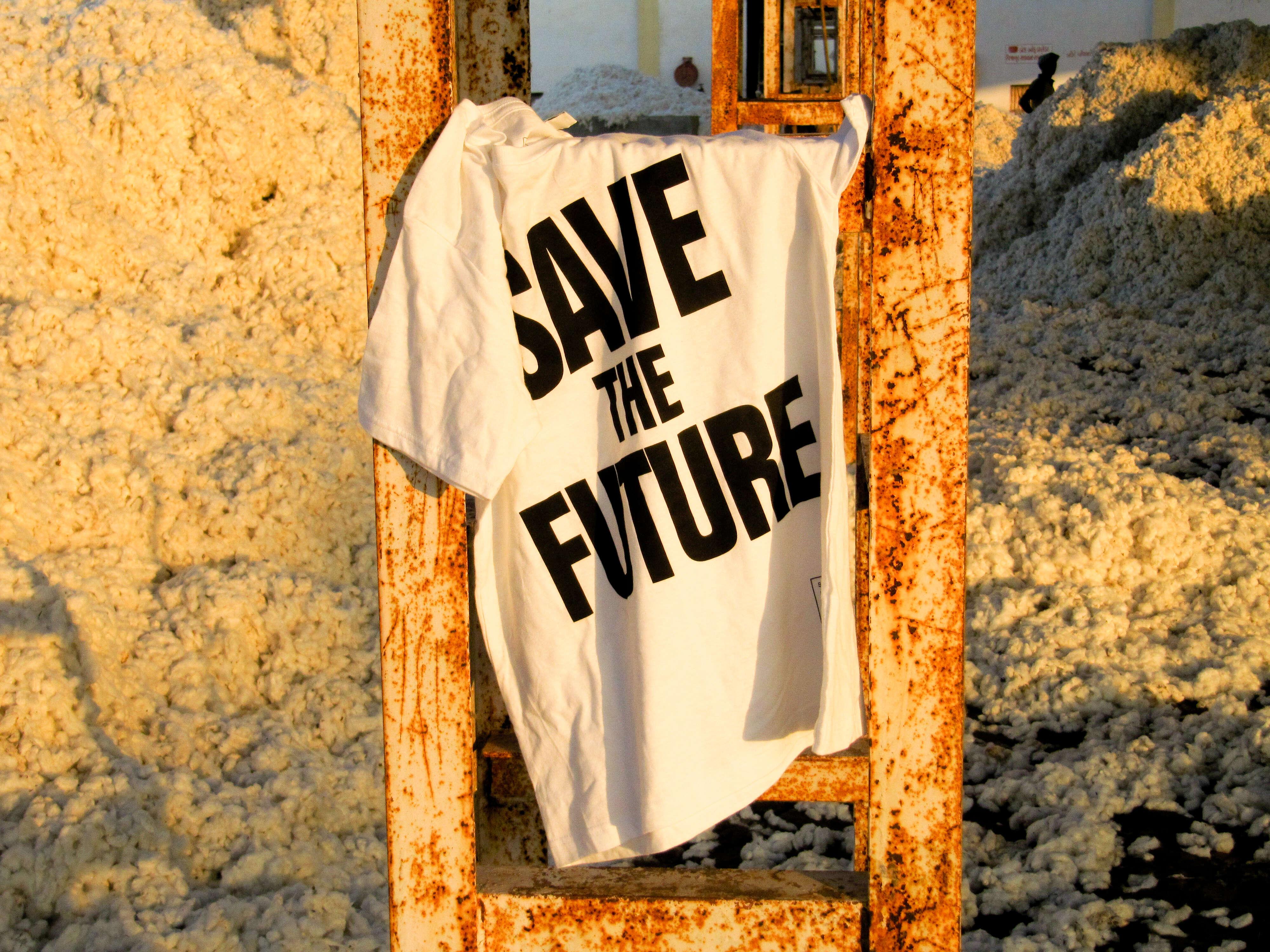 Clothes and climate: Is cotton best?

In any discussion of the climate emergency, the finger of blame is invariably pointed at the transport, food and energy sectors. Responsible for vast greenhouse gas emissions, they are frequently, and understandably, held responsible for global heating.

But there is an industry which is rarely mentioned in the debates. The textile industry pumps between 1.22 and 2.93 billion tonnes of CO2 into the atmosphere every year. It takes, depending on the fabric, between 15 and 35 tonnes of CO2 to manufacture a tonne of textiles, compared with, for example, just one tonne of CO2 to produce a tonne of paper. The result is that, by some estimates, the life-cycle of textiles (including laundering) accounts for 6.7% of all global greenhouse gas emissions. That’s the equivalent of every person on the planet taking a 4,100 km long-haul flight every year.

This wouldn’t be such an acute problem if textile production, and consumption, were falling, or even stable. But both are increasing drastically. Since 1975, the global production of textile fibres has almost tripled. 107 million tonnes of textiles were produced in 2018, a figure which is expected to reach 145 million tonnes by 2030.

And the “churn” of fast fashion gets quicker each year. Some labels now release as many as 24 collections in a 12 month period and clothes are often sold at pocket-money prices: there was a 30% drop, relative to inflation, in the price of clothing within the European Union between 1996 and 2018. The margins may be low, but the volumes are huge: Europeans now consume on average 31.21 kg of textiles per capita every year.

Around 87% of those textiles consumed in Europe are imported. That makes clothing a key player in what’s called “carbon leakage” (in which the benefit of emissions-reductions in one country is off-set by the tendency to burn hydrocarbons in another). 43% of China’s greenhouse gas emissions from apparel production, and 44% of India’s cotton-related emissions, are induced by foreign final demand. We are importing pollution when we purchase so many clothes.

It’s more important than ever that retailers and consumers choose sustainable fibres, but the reverse is happening. The quantity of polyester in our garments has doubled since the year 2000, meaning that now over half of all global fibre production (51.5%) is made from petroleum oil. It requires around 342 million barrels of oil every year to meet demand for plastic-based fibres and the disintegration of synthetic fibres (like polyester, nylon and acrylic) is responsible for between 20 and 35% of all microplastics in the marine environment.

Another increasingly common fibre is viscose, but that, too, is problematic: 150 million trees are felled annually to produce the wood pulp required to manufacture viscose. With the global forest area shrinking every year (we’ve lost 56 million hectares since the year 2000), a fibre based on clear-felling forests hardly seems sustainable. 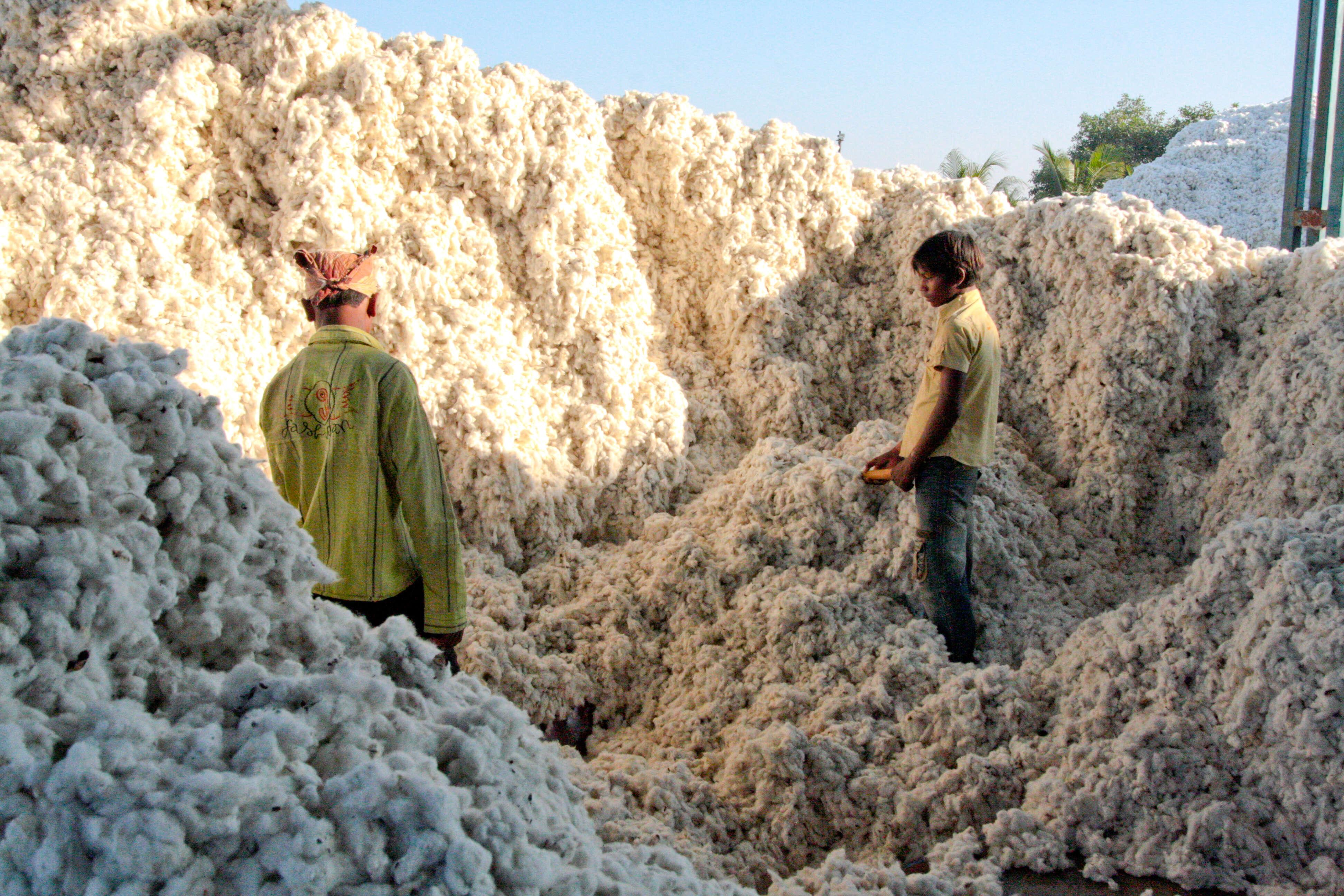 What’s the solution? Cotton is the obvious natural option. But it’s no longer cultivated naturally: 74% of all cotton is now genetically modified and farmed using industrial quantities of pesticides and fertilisers. Although cotton accounts for only around 2.3% of the world’s arable land, it uses over 16% of global insecticides. It also uses a higher percentage of ‘Highly-Hazardous Pesticides’ than any other agricultural crop: Whereas only 25.8% of pesticides used globally on cereals, and 43.5% in rice, are deemed highly hazardous, in cotton the equivalent figure is 69.1%.

Between pesticides and synthetic fertilisers, the global cotton crop uses 8.2 million tonnes of chemicals. Those inputs impoverish the soil, pollute waterways, decimate biodiversity and, often, poison humans too. They also mean that the carbon footprint of cotton is extraordinarily high: between 2 and 4 tonnes of CO2 per hectare. Globally, cotton cultivation accounts for 220 million tonnes of CO2 per annum. It’s also a fibre which is notoriously thirsty. The global water footprint of cotton is around 233 billion cubic metres a year, the same as 238 bathtubs of water per person every year. 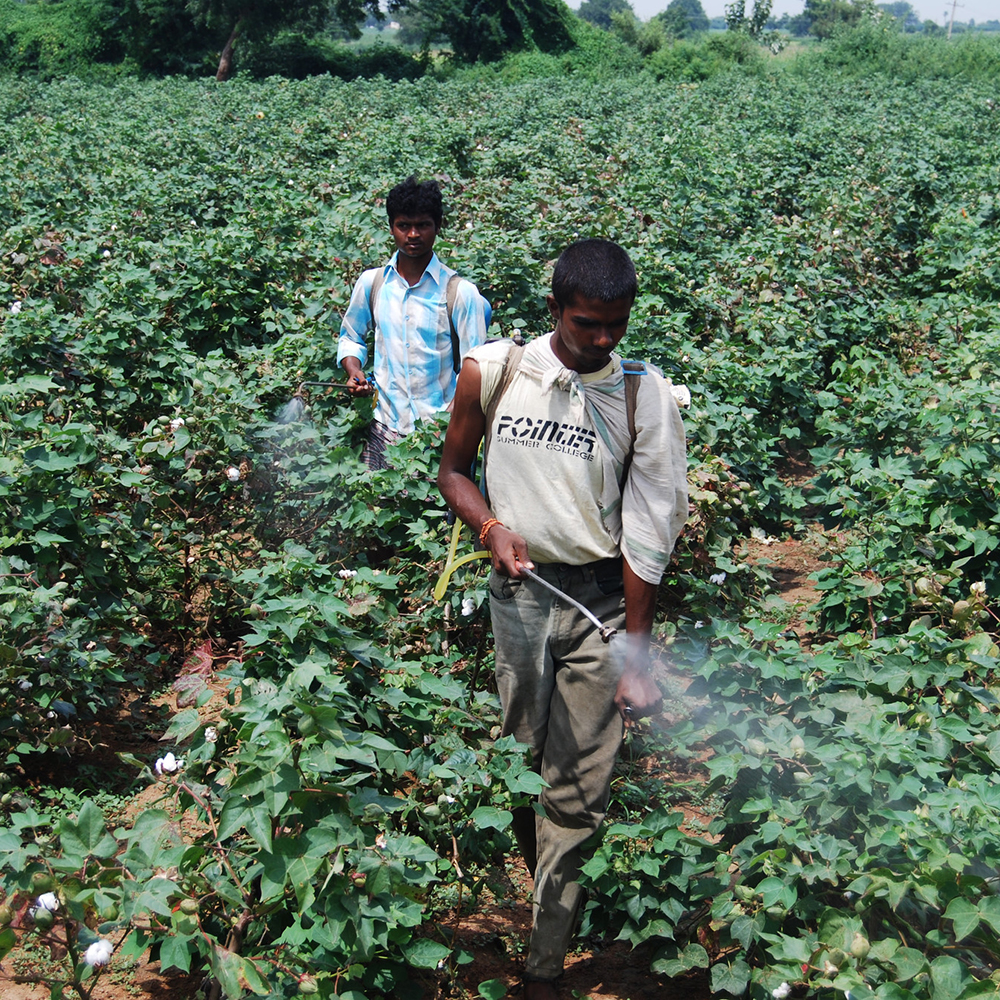 There is, however, a way of cultivating cotton which drastically reduces its environmental impacts. Compared to conventionally cultivated cotton, organic cotton has 40% less “global warming potential”, and offers a 91% reduction in blue water consumption (freshwater withdrawal from lakes, rivers and aquifers). The yields of organic cotton tend to be marginally smaller, but because the input costs are far lower, profit margins are actually greater (between 4 and 30%).

It’s a form of cultivation which has repeatedly been shown to promote gender equality, community bonds, biodiversity, improved soils and human health. Rather than becoming individually indebted to corporations for seeds and chemicals, organic farmers form cooperatives and “buying clubs”. The long and opaque supply chains of conventional cotton become short and transparent, with cut-throat practices replaced by a sense of common purpose.

Organic cotton cultivation makes cotton farmers resilient rather than vulnerable. There is safety in relationships which are based on reputation, trust and longevity. The practice of crop rotation and diversification offers insulation against fluctuating cotton prices. Farmers’ soils, too, are more resilient in the face of the climate crisis – not immune to drought, but far better placed to survive it because healthy soils retain water and nutrients.

These advantages explain why organic cotton is rapidly growing. Production increased by 56% in the 2017-18 growing season, and by 31% - to 239,787 tonnes of fibre - in 2018-19. Globally there are now 418,925 hectares of land dedicated to organic cotton, with another 55,833 in conversion. The two major certification bodies for organic textiles – the Organic Contents Standard (OCS) and the Global Organic Textile Standard (GOTS) increased their number of recognised organic facilities by 48% and 35% respectively between 2018 and 2019. Consumption, as well as production, is increasing: since 2017, there has been a 127% increase in the number of products sold as organic cotton in the UK. Farmers, retailers and consumers are all realising that, in an industry marked by environmental degradation, organic cotton is the moral fibre.

Today is world cotton day, a good occasion for all consumers, business owners and policymakers to resolve to promote and purchase only organic cotton. But even that ethical choice is insufficient to address the issues of global heating related to textiles. Cotton now has only a 24.4% share the global fibre market. Most of us are wearing clothes made from trees and, predominantly, petrol. Those clothes are invariably produced in factories, and transported thousands of miles by sea and air, using fossil-fuels. As consumers we need to badger retailers about whether they are signatories to the Fashion Industry Charter for Climate Action and demand to know what progress they are making towards net-zero emissions. Because until there is a radical shift in how we clothe ourselves, we will simply be stripping the planet bare.