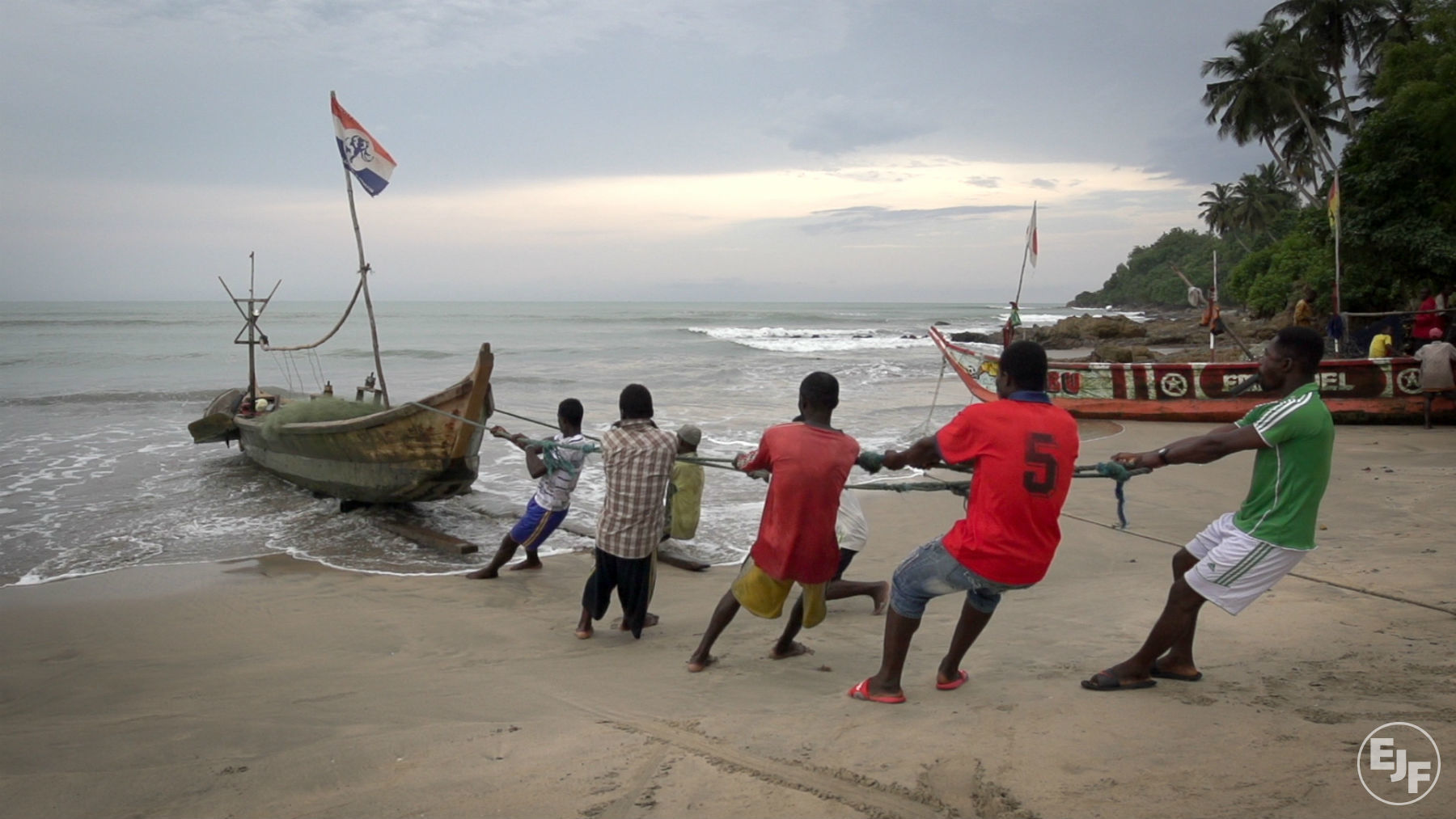 Stakeholders from the artisanal fishing sector in the Central Region of Ghana today deliberated on a recent research study conducted under a three-year, EU-funded project entitled Far Dwuma Nkɔdo, or Securing Sustainable Fisheries.

Among the key threats identified were collisions between canoes and industrial fishing vessels and the destruction of artisanal fishing gear, in some cases within the zone reserved for artisanal fishers (Inshore Exclusion Zone or IEZ).

In 2016 alone, the study counted thousands of cases of industrial vessels destroying nets and canoes of artisanal fishermen at sea. Yet only around 5% of these cases were reported to the Fisheries Commission, and even fewer cases (around 1% of the total) resulted in compensation for the losses incurred. According to the fishers surveyed, they are often unable to bring claims in such cases due to difficulties identifying the offending vessel.

In an interview, Daniel Ennien, a fisherman at Egyaa lamented:

“I went out for an expedition last week Monday dawn with my team and after setting our net a fishing vessel passed through our zone and destroyed it. They are not just destroying our gears they are stealing the fish that belongs to those of us with the small canoes. Now I am jobless and I don’t know how I will manage to take care of my wife and children.”

“I have decided to take the vessel to the shrine and curse it to sink in the ocean because they are heartless,”

an angry and frustrated Daniel added.

Today, Hen Mpoano and the Environmental Justice Foundation (EJF), who are partnering on the project, brought together around 50 Chief Fishermen from across the Central Region, as well as representatives of fisher and fishmonger associations, to deliberate the findings of the study and ensure they represent accurately the picture on the ground. The findings will form a baseline against which the Far Dwuma Nkɔdo project will measure the impact of its interventions over the coming years.

The project is working to improve the lives of artisanal fisherfolk and help Ghana restore its dwindling fish stocks.

He indicated that the focus of the project’s interventions will be on vulnerable, disenfranchised fishermen and women who are considered to be most at risk of the impacts of illegal fishing and declining fish stocks.

“EJF and Hen Mpoano will support communities to document and report cases of industrial fishing vessels operating illegally in the IEZ reserved for traditional fishermen. This will include training communities in smartphone technologies to enable the gathering of visual evidence that can be shared with all stakeholders, and ensuring this is brought to the attention of the enforcement authorities”, he said.

“It is promising that most communities surveyed were keen to form voluntary committees with legal backing to fight illegal fishing that is heavily impacting catches in their fishing grounds.”

“Actions at the local level must be supplemented by effective and transparent action by the Ministry to combat illegal and destructive practices of the industrial fleet, and to ensure fishers are compensated for losses resulting from conflicts at sea. The Far Dwuma Nkɔdo project is ready to collaborate with the Ministry to address the challenges facing Ghana’s fishing sector,” he added.

Small scale fisheries contribute significantly to national GDP and employ 80% of fishers in the country but are under threat from competition with industrial vessels, and vast over-capacity in the fishing sector. Populations of small pelagics have collapsed over the past 20 years, threatening the food security of the nation and the livelihoods of over 2 million people engaged, directly or indirectly, in the artisanal fishing sector.

Notes to the Editor: