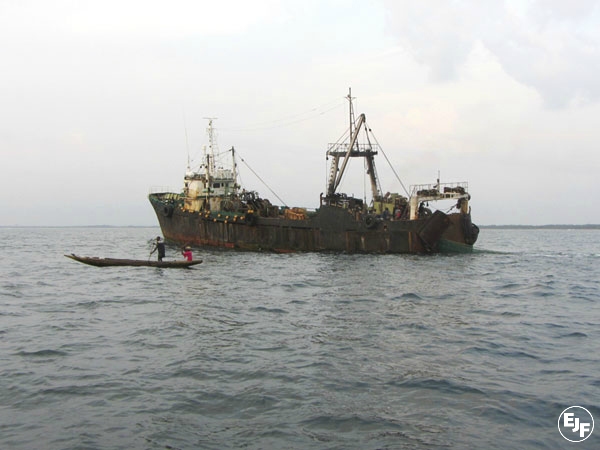 The EU Commission just warned Sierra Leone with a “yellow card” after considering the country’s level of development and engagement against Illegal, Unreported and Unregulated fishing (IUU) to be inadequate.

This formal notice, based on the EU IUU Regulation (Council Regulation (EC) No 1005/2008), should encourage the country to take immediate actions or it will risk to be banned from exporting fish to the EU.

According to the EU Commission, "in Sierra Leone legal texts governing fisheries are outdated and sanctions fail to deter illegal operators operating internationally under the flag of Sierra Leone, without the fisheries authorities' knowledge. In addition, the number of licensed vessels exceeds the available resources and authorities fail to monitor or control their waters."

Small-scale artisanal fishing is critical to Sierra Leone. It directly or indirectly employs around 230,000 people, and accounts for between 65% and 80% of animal protein consumed in the country. Women in particular rely on fish as a key source of income by running fish smoking co-operatives and taking the fish to market.

EJF has been documenting illegal ‘pirate’ fishing in Sierra Leone’s waters for seven years. Between 1 January 2010 and 31 July 2012, EJF’s community surveillance project in southern Sierra Leone received 252 reports of pirate fishing by industrial vessels in inshore areas. Nine out of 10 of the vessels were accredited to export their catches to Europe, the world's most valuable import market for fish[1] with total household expenditure on seafood of 54.7 billion euros in 2013. [2]

Sierra Leone’s own fisheries ministry (MFMR) estimates that the country loses approximately US $29 million per year due to IUU fishing activities.[3] A significant proportion of these losses stem from the activities of foreign trawlers operating illegally in Sierra Leone’s Inshore Exclusion Zone (IEZ), an area strictly reserved for artisanal fishermen and as a breeding and nursery ground for fish.

“For a country so dependent on fish, it is critical that Sierra Leone recognizes the importance of combatting IUU fishing. We call on the recently appointed Minister of Fisheries and Marine Resources, Ms. Elizabeth Mans and the Government of President Koroma to act urgently to combat IUU in their waters, weed out corruption and ensure the maximum benefit from this extremely valuable resource accrues to the people of Sierra Leone. EJF offers its full support to help achieve a legal, sustainable and well-managed fishery sector in Sierra Leone”.

“Selling fishing licenses cheap to foreign companies and failing to monitor and regulate their activities will spell disaster for all those in Sierra Leone who depend on fisheries for employment, income and food security. Conversely, by regulating this resource properly, it can generate valuable export driven income while providing for the people of Sierra Leone. Action today will bring huge benefits tomorrow. Business as usual will have huge long-term costs" Executive Director Steve Trent

The Commission now plans to enter into a more formal dialogue with the authorities of Sierra Leone and will propose a formal Action Plan to address the problem.

Across the world, other States like Spain, Korea or Sri Lanka have responded to yellow cards with essential reforms that have helped make IUU fishing more difficult and less profitable.

EJF has been operating in Sierra Leone since 2008. We have been documenting illegal trawlers, engaging local communities and undertaking medical emergency missions.

EJF’s work aims to be direct and effective, drawing from investigations, field projects and community partnerships to create targeted policy briefings and reports, campaigns films and international advocacy that reach the highest level of policy making in government, business and amongst the public.

EJF was founded in 2000 by Steve Trent and Juliette Williams who remain the charity’s Directors, and who today work with an international team based in the UK, Spain, Germany, Cote d’Ivoire, Ghana, Liberia and Serra Leone. Our work is guided by a UK Board of Trustees and supported by our patrons who help our campaigns to reach new international audiences.