We live in an era of extraordinary climate injustice.

Those most affected by our warming world are shut out of the negotiations that will determine the future of our planet. Global action on climate change is not happening fast enough.

The world’s biggest multi-national meetings held to discuss humanity’s collective response to the climate crisis are the United Nations’ Climate Change Conference of the Parties - the climate COPs - now in their 27th year.

As the world heats up, the voices of those first and worst affected by the climate crisis are not being listened to in the air-conditioned halls of these conferences. The delegates at this year’s COP27 had a moral imperative to listen to people living on the frontlines of climate breakdown.

The People’s COP27 made it simple for world leaders to listen.

The People’s COP27 virtual event took place on the 1st November. Expert speakers represented those who are already being impacted by climate change in three high-level panel sessions. They discussed loss and damage, climate justice and mitigation: three key themes that dominated talks at COP27.

Featuring films, interviews, key note speakers and expert panellists, this event represented the voices of the unheard, bringing the most important perspectives to the table before COP27 began.

Watch the panel discussions from the event on demand below.

Loss and damage was one of the most hotly debated issues at COP27.

The inevitable consequences of human-caused climate change have collectively come to be known as “loss and damage”.

Alongside ‘mitigation’ and ‘adaptation’, ‘loss and damage’ is the third key pillar of climate change and recognises two simple facts. Firstly, no matter how quickly emissions are cut, millions of people around the world have already suffered devastating impacts. Secondly, these people are invariably the ones who have done the least to contribute to their causes.

The need for compensation for these affected parties was widely recognised at COP26 and on its first time being officially included on the agenda, COP27 delivered a dedicated loss and damage fund.

Bringing together expert speakers and panellists, this session added to the groundswell of pressure that helped convince COP27 delegates to turn this ambition into a reality.

The climate crisis is ultimately a human rights issue. Without a sustainable, healthy environment, people cannot enjoy their most basic human rights. But the climate crisis disproportionately affects those already suffering discrimination and injustice – both locally and globally. Ensuring a rapid, just transition to a low-carbon world – that boosts human rights rather than undermining them – should be a global priority.

During this session our expert speakers and panellists reflected on how to ensure that global climate action works quickly and fairly for everyone.

They identified the concrete demands that COP27 delegates needed to act on to convey hope and urgency to negotiators that met in Egypt.

We only have a few years to dramatically reduce the global carbon emissions heating our planet, and give ourselves the chance of a safe, sustainable future. The biggest historic emitters, those who have grown rich from the carbon economy, have the responsibility to act first and fastest, but ultimately it will be a global effort.

So far, climate COP negotiations have not faced the true seriousness of the crisis we are facing.

Featuring lively discussion between expert panellists, this session explored how to achieve the radical reductions in emissions we need, and provided a roadmap to a better future for everyone on Earth.

Ayisha Siddiqa - Co-Founder of Fossil Free University and Polluters Out

Our voices gallery showcases video messages from activists and citizens around the world living on the front lines of the climate crisis.

The People’s COP27 helped amplify their calls for action, giving them the global stage that COP27 failed to deliver.

Watch over 40 messages from 37 countries and hear the voices of the marginalised people who feel the urgency of the crisis every day.

With the help of messages from those on the frontlines of climate breakdown and our expert panellists, speakers and moderators, the People's COP27 produced 'A People's Climate Manifesto' - 10 key demands for urgent climate action. 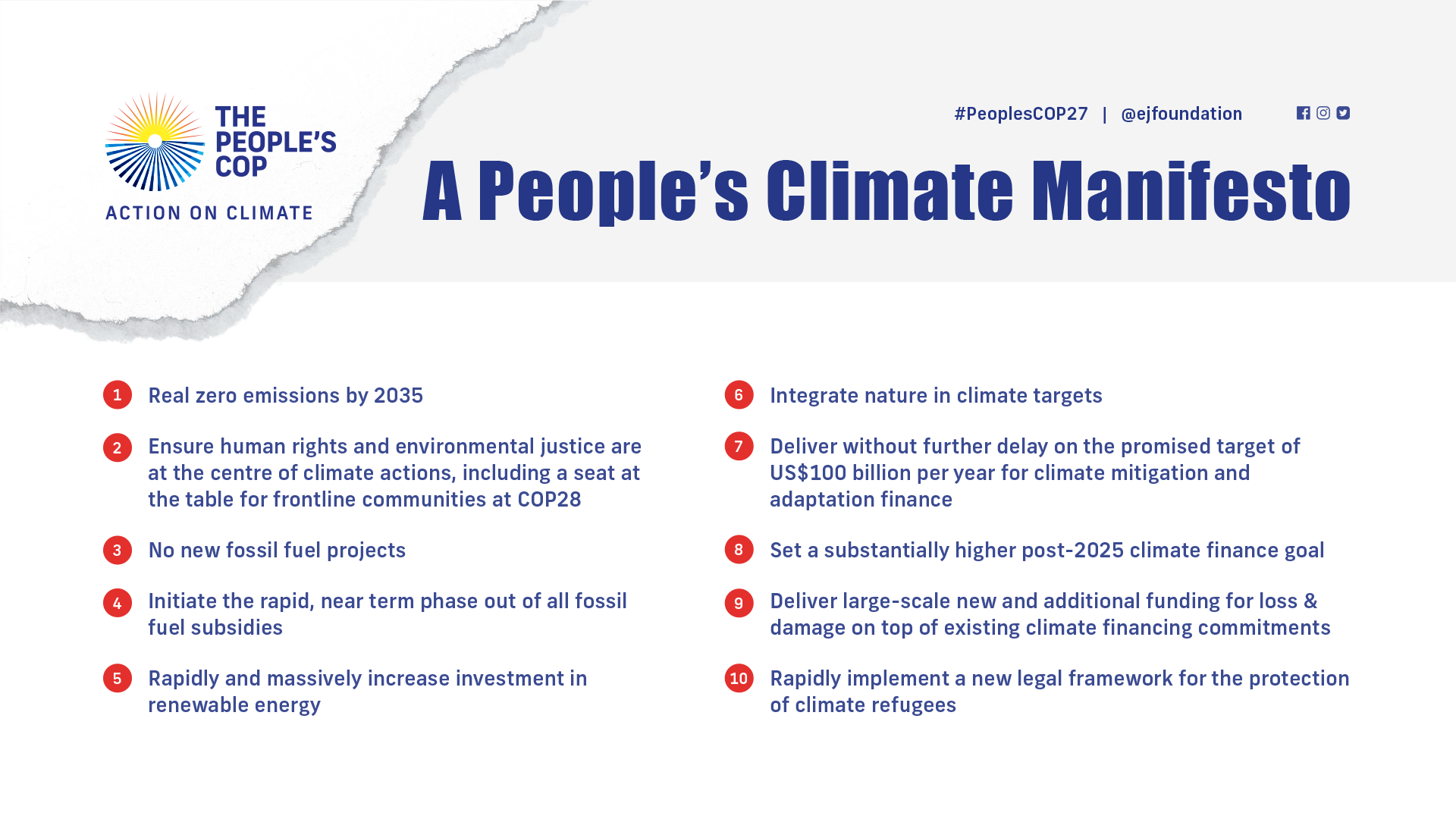 Though COP27 is over, the manifesto's demands remain as important as ever. Building towards COP28, these 10 demands for climate justice must be amplified across the world and acted upon by world leaders to ensure they create a safe and sustainable future for us all.

Will you sign the People's Climate Manifesto and join the calls for urgent, just climate action?