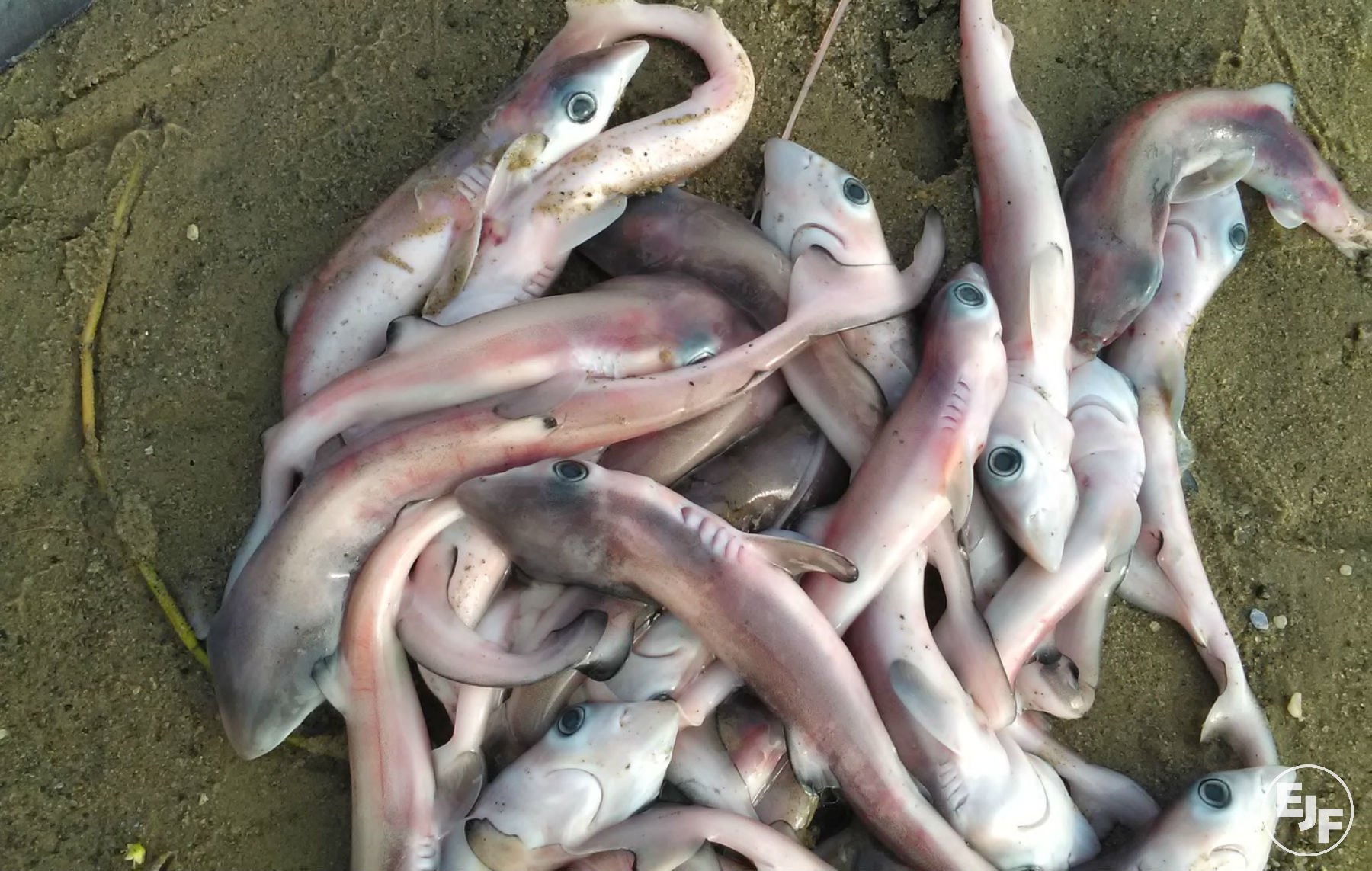 A race to the bottom: The true price of overfishing

This month, EJF staff found over 20 dead blue shark pups inside a pregnant female landed in Cote d’Ivoire. Sharks are taken for their fins, which fetch an especially high price because of the demand from Asia for shark fin soup; as well as the body meat, which is sold locally.

These dead pups are a stark reminder of our aggressive plunder of the oceans, and the need for sustainable fisheries.

Blue sharks are long and slender, a deep indigo across the back and a vibrant blue on the sides, fading to white underneath. They migrate vast distances, moving slowly clockwise around the Atlantic, riding the Gulf Stream to Europe, and taking various currents down the European and African coasts.

Since industrial fishing began in the early 1950s, 90% of the world’s large ocean fish – such as sharks, cod and swordfish – have been lost. Overall, 90% of the planet’s fish stocks are now either fully exploited or overfished, according to the latest report from the UN Food and Agriculture Organisation.

Sharks are especially hard hit. The International Union for the Conservation of Nature estimates that around a third of open-ocean shark species are at risk of extinction. Even blue sharks – which are the world’s most abundant open-ocean shark – are listed as ‘near threatened.’ As well as falling victim to the fin trade, they are a major bycatch of longline and driftnet fisheries.

Local Ivorian fishers reported to EJF that from 1990s to 2000s, each canoe could bring 20 to 30 sharks in a single day's fishing. Nowadays, they have to go out for 3-4 days, and even then they bring home fewer sharks.

Although these local fishers do have an impact, industrial vessels take the lion’s share. Illegal fishing by international vessels is rife in the Gulf of Guinea, and they often target sharks and rays.

The shark fin industry is particularly gruesome and wasteful. Although the body of the shark EJF recorded this time, landed by canoe, was sold as food, trawlers in the region have been seen taking some sharks only for their lucrative fins.

Once the fins have been cut from the body, the sharks are thrown back into the ocean, often still alive. Unable to swim without their fins, they wallow on the seabed until they suffocate or bleed to death.

Currently, Cote d’Ivoire offers no legal protection for sharks; neither do neighbouring Liberia or Ghana. However, EJF is working closely with the Ivorian Oceanography Research Centre and the Government’s Aquaculture and Fisheries Department, to develop a sustainable management plan and appropriate legal framework to safeguard shark populations.

The data collected from the blue shark and her pups in this sad incident will at least provide valuable evidence for setting measures to protect blue shark populations. Knowledge of trends in the diversity of the species landed, and their sizes, as well as the number of canoes and how long they spend at sea will all help chart a course towards the long-term sustainability of the fishery.

It is vital that such management plans exist. Not only are these top predators magnificent animals, their loss can have serious impacts on entire marine ecosystems. Wildlife and coastal communities alike will suffer the consequences of their demise. 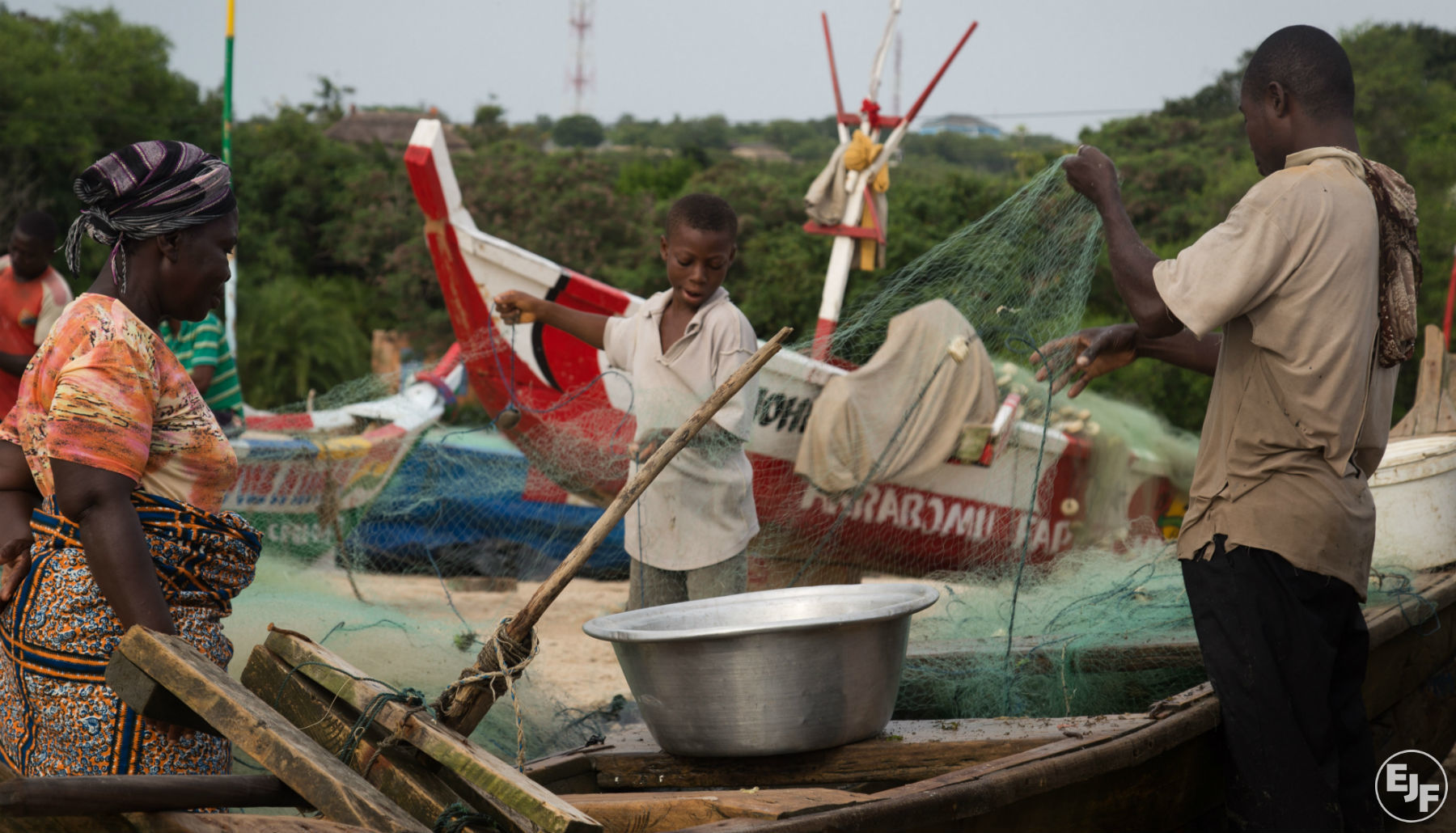