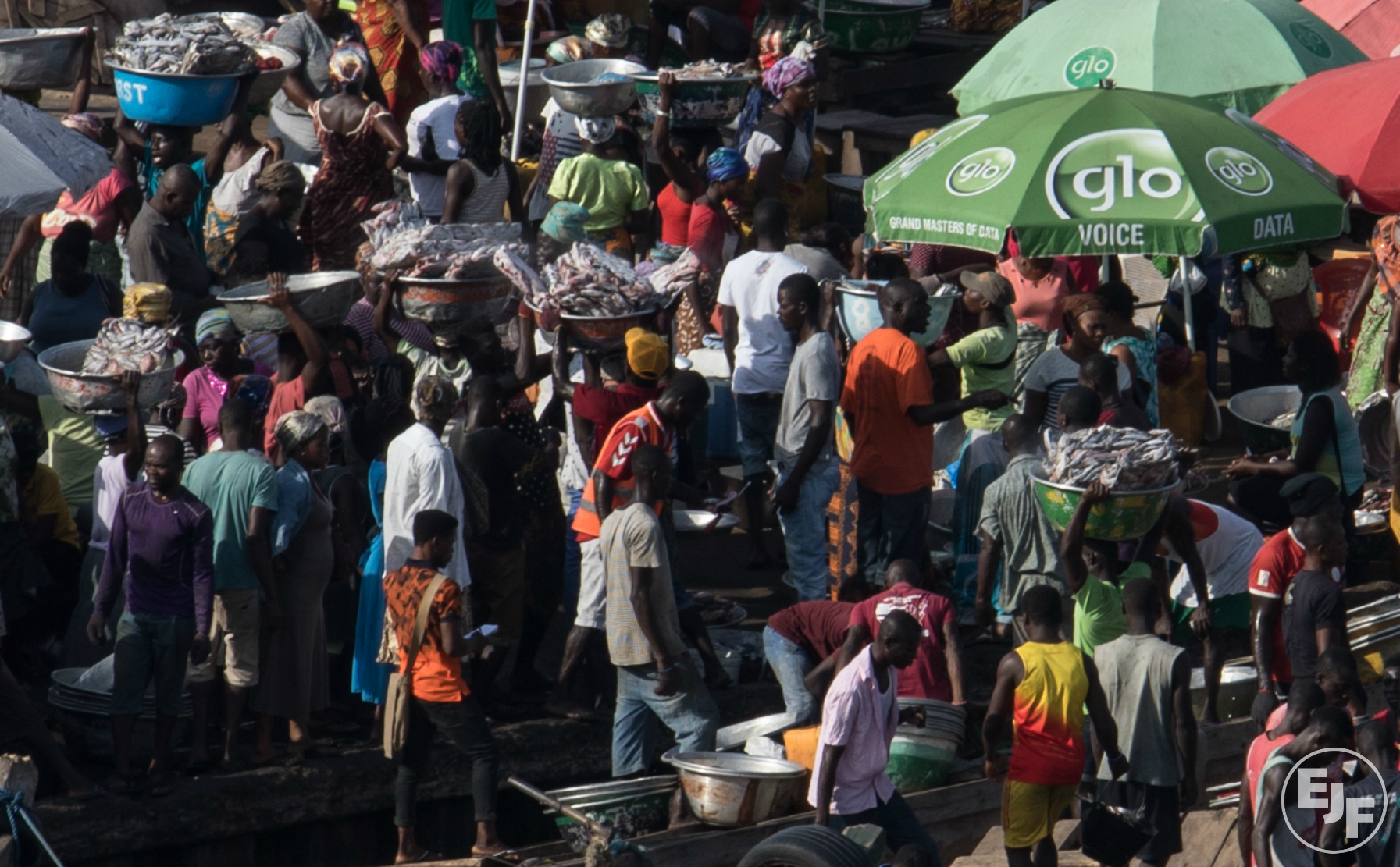 An illegal fishing practice threatening to destroy Ghana’s coastal fisheries will be highlighted in a new film by EJF and it’s local partner, Hen Mpoano. To mark the first ever International Day for the fight against IUU fishing, the film will premiere today in Ghana, and demonstrates the destructive and illegal practice known locally as ‘saiko’.

Saiko - illegal, but highly lucrative - is a practice engaged in by industrial trawlers in Ghana. The trawlers illegally sell fish to specially adapted canoes at sea. This practice is driving the collapse of Ghana’s inshore fishery, on which millions of Ghanaians rely for food security and income.

The film, Ghana: A Fishing Nation in Crisis, which will premiere on Ghanaian TV, was produced under the EU-funded Far Dwuma Nkɔdo Project, a partnership between EJF and Ghana-based NGO Hen Mpoano. The film will be released for those outside of Ghana tomorrow. To accompany the film, a new briefing exposing the scale of saiko and its impacts on Ghana’s fisheries and coastal communities is released today.

After the screening, a panel, including academics and representatives from the Ghana National Canoe Fishermen Council and the Fisheries Commission, will discuss the urgent need to protect Ghana’s fish stocks.

Ghana’s fishing industry has been plagued by illegal activities in recent years. Destructive fishing practices and over-exploitation by industrial trawlers have driven local fishers facing plummeting incomes to turn to illegal fishing with light, dynamite, and chemicals. These are quick fixes for fishers in a desperate situation that are causing irreparable damage to remaining fish stocks and, in some cases, risking human health.

Saiko is precipitating an ecological and human catastrophe. Originally an informal trading system, where unwanted industrial bycatch would be exchanged at sea for fruit and livestock brought by canoes, it is increasingly a part of targeted fishing for the trawlers.

This puts industrial fishing vessels in direct competition with small-scale fishers for catches of species such as sardinella that are a staple food for local communities. Having effectively ‘stolen’ fish from artisanal fishers, saiko operators sell these back to the same fishing communities for profit.

Saiko is a highly organised and lucrative practice, accounting for an estimated 100,000 tonnes of illegal and unreported catches in 2017, with an estimated landed value of US$34-65 million. The statistics reveal the stark inequality of this trade: an average saiko canoe can return with as much 400 times the amount of fish as a canoe fishing trip.

Steve Trent, EJF’s executive director, says: “The implications of the imminent collapse of Ghana’s small pelagic fishery cannot be overstated. Over 2 million people in Ghana rely on fisheries for their livelihoods, with limited alternative sources of income or employment. Should the resource disappear, mass migration and social upheaval can be considered a very real prospect.These saiko operators are stealing from the poor who in turn are given little option but to buy the stolen fish back. There can be no doubt, no equivocation, this has to be stopped.”

It is not too late to save Ghana’s fisheries. Saiko remains illegal in the country, and robust enforcement of this law could effect real change.

Kofi Agbogah, director of Hen Mpoano, says: “Transhipments of fish at sea are notoriously difficult to monitor, even with the most advanced systems in place. Instead, all catches should be landed in authorised ports and recorded in official statistics to inform sustainable management. This would also ensure that restrictions on fishing gear that prevent the capture of non-target species are complied with.”

Nana Solomon from the Ghana National Canoe Fishermen Council, who will be a member of the panel on Tuesday, says “The voices of small-scale fishers and fishmongers must be heard when it comes to designing Ghana’s fisheries management, to help create policies that are fair and sustainable.”