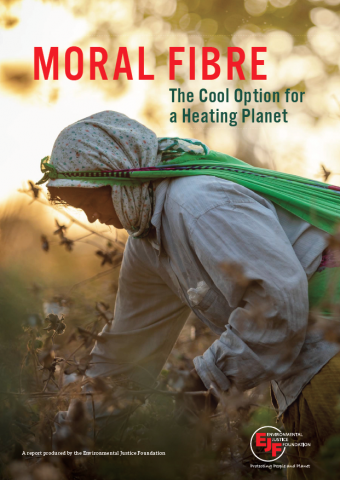 Moral fibre: The cool option for a heating planet: This report reveals the significant role our clothes play in global heating, and examines organic cotton as a key part of the solution.

Moral fibre: The cool option for a heating planet

This report reveals the significant role our clothes play in global heating, and examines organic cotton as a key part of the solution. 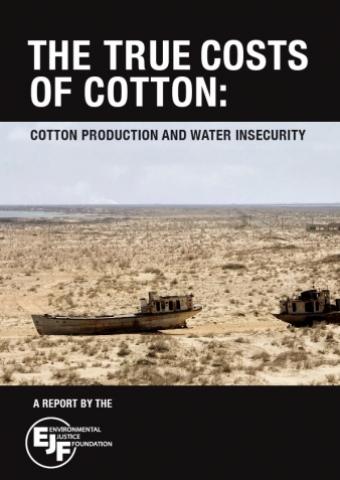 The True Costs of Cotton: Cotton Production and Water Insecurity: The report highlights the massive mismanagement and abuse of fresh water resources in cotton production, with a special focus on Central Asia and Uzbekistan in particular.

Cotton production can be a pathway to development and is an important livelihood option for millions of people. However, production can have unintended social and environmental impacts, in particular this report outlines the role that it plays in contributing to water insecurity.

Cotton is one of the thirstiest crops in the world. Each year 198 cubic gigametres (Gm3) of water are used just to grow cotton and even more is used in processing it. ‘Cheap’ cotton is fuelling unsustainable production, and consumers commonly do not pay a price which reflects these costs. More than 80 percent of the water footprint of cotton consumption in EU member states is located outside Europe, in countries such as China, Pakistan, and Uzbekistan.

The draining of the Aral Sea in Central Asia stands as one of the most damning examples of unsustainable cotton production. The Aral Sea was once the fourth largest inland sea in the world, stretching across an area of 66,000km2. In less than a generation, it has shrunk to 10 percent of its former volume. 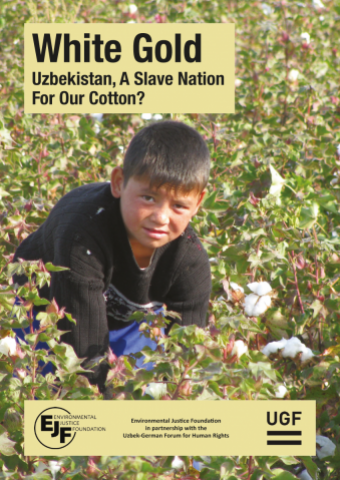 White Gold: Uzbekistan, a Slave Nation for Our Cotton?: The report summarises information provided by independent journalists and human rights activists on the conditions under which the Uzbek cotton industry operates.

White Gold: Uzbekistan, a Slave Nation for Our Cotton?

EJF's report White Gold: Uzbekistan, Slave Nation for Our Cotton? summarises information provided by independent journalists and human rights activists on the conditions under which the Uzbek cotton industry operates, and produces evidence of young children picking cotton at the behest of the authoritarian Uzbek government. 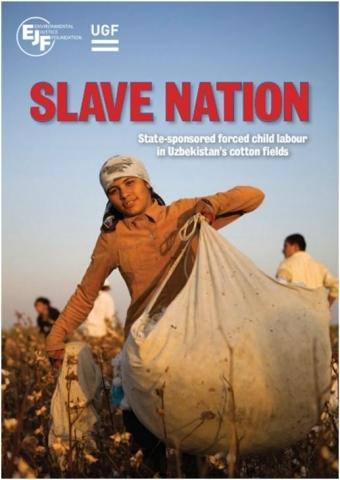 Slave Nation: This report reveals how the Government of Uzbekistan continues to lie to the international community while routinely compelling hundreds of thousands of children as labourers in the country’s annual cotton harvest.

EJF’s “Slave Nation” reveals how the Government of Uzbekistan continues to lie to the international community while routinely compelling hundreds of thousands of children as labourers in the country’s annual cotton harvest.


With evidence that little has changed despite the promises of the Uzbek Government and with the spring planting season just around the corner, EJF asks whether it will be children forced to pick the crop again when the harvest comes around later this year. 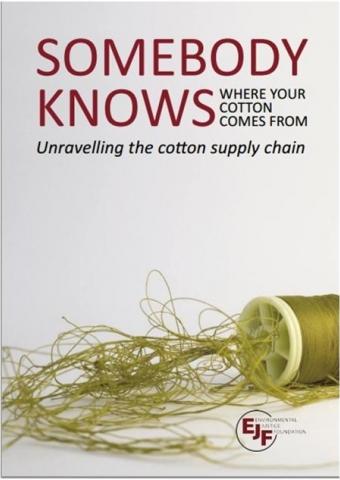 Somebody Knows: A must-read for all retailers and brands keen to understand why knowing where their cotton comes from is so important, and how they can go about tracking and tracing this seemingly complex supply chain.

Somebody Knows is a report that explains how retailers can investigate their supply chain, tracing the production of their goods from raw materials to finished products, enabling them to eliminate cotton from environmentally or socially unacceptable practices – such as cotton from Uzbekistan. 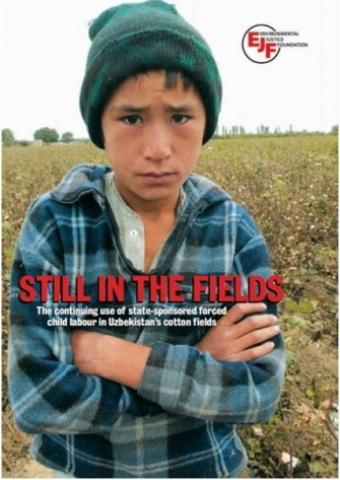 Still in the Fields: The report summarises EJF’s in-country investigations in October 2008 and reports from independent media and human rights defenders in Uzbekistan.

Still in the Fields

The report reveals the widespread use of state-sponsored forced child labour in the cotton fields of the Central Asian Republic of Uzbekistan, the world’s 3rd largest cotton exporter and a major supplier to both European traders and ultimately, the EU marketplace.

Its release coincides with the tenth anniversary of the landmark International Labour Organisation (ILO) Convention 182 on the Worst Forms of Child Labour. 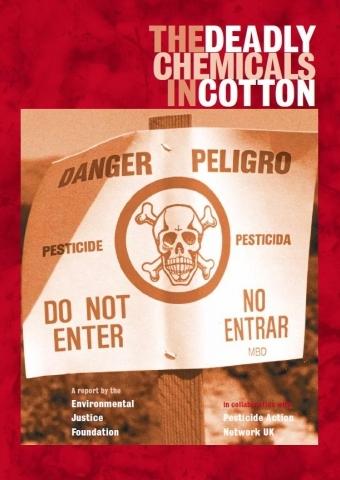 The Deadly Chemicals in Cotton: A report exposing the human health and environmental cost of pesticide use in global cotton production.

The Deadly Chemicals in Cotton

In collaboration with the Pesticide Action Network UK this report reveals the routine use of harmful chemicals, including nerve agents and neurotoxins, on cotton crops.

Vomiting, paralysis, incontinence, coma, seizures and death are some of the many side effects suffered by farmers and children in the developing world who are routinely exposed to pesticides, many of which are banned or restricted in use in the West. The report puts a case across for organic cotton alternatives. 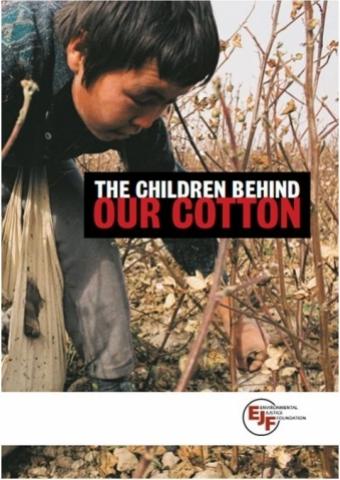 The Children Behind Our Cotton: This report details the shocking conditions endured by more than an estimated one million children who work 12-hour days in extremes of hot and cold weather, many suffering physical, verbal and sometimes sexual abuse.

The Children Behind Our Cotton

This Environmental Justice Foundation (EJF) report reveals how children in some of the world’s largest cotton-producing countries are serving as underpaid, free or forced labourers to feed the global demand for textiles.


China, India, Pakistan, Brazil, Uzbekistan and Turkey – six of the world’s top seven cotton producers – have been reported to use child labour in their cotton fields. In India, where as much as 70% of the country’s estimated 100 million child labourers work in agriculture, several hundred thousand children – mostly girls – sacrifice their education and health to produce hybrid cottonseed for a thriving industry. 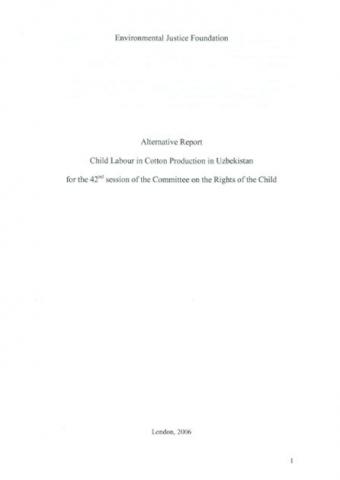 EJF Uzbekistan UNCRC Submission: Alternative report for the 42nd Session of the Committee on the Rights of the Child.

Alternative report for the 42nd Session of the Committee on the Rights of the Child. 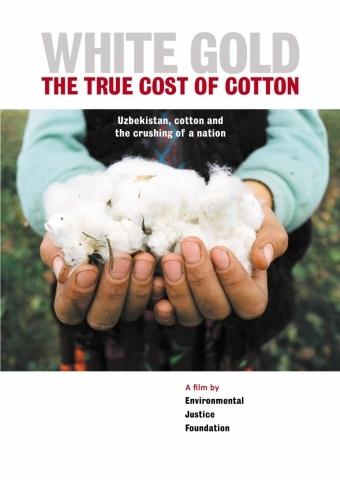 This internationally acclaimed report exposes how the billion-dollar cotton industry is causing an environmental catastrophe and human rights abuses in Uzbekistan, Central Asia.

White Gold highlights the disastrous demise of the Aral Sea as the rivers that once fed it have been diverted to irrigate cotton fields. The report also draws attention to the endemic use of forced child labour in the annual cotton harvest. Uzbekistan is unique for the scale of forced child labour - hundreds of thousands of children are forced to labour in the fields undergoing arduous work for little or no pay.

Detailed investigations by EJF expose the use of cotton revenues in Uzbekistan to support a corrupt, brutal and coercive dictatorship.